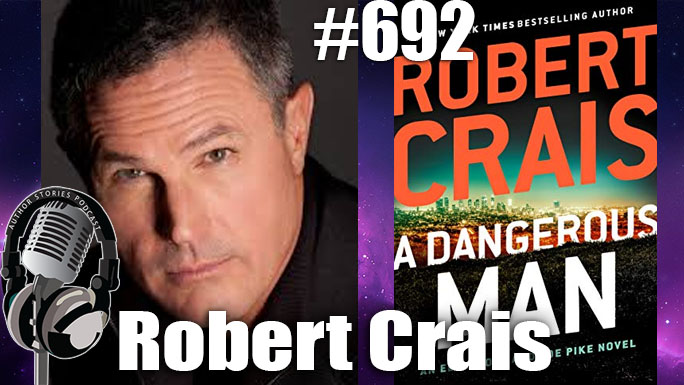 Today’s author interview guest is Robert Crais, author of the Elvis Cole and Joe Pike series, who joins me to talk about his new thriller A Dangerous Man.

A brilliant new crime novel from the beloved, bestselling, and award-winning master of the genre–and Joe Pike’s most perilous case to date.

Joe Pike didn’t expect to rescue a woman that day. He went to the bank same as anyone goes to the bank, and returned to his Jeep. So when Isabel Roland, the lonely young teller who helped him, steps out of the bank on her way to lunch, Joe is on hand when two men abduct her. Joe chases them down, and the two men are arrested. But instead of putting the drama to bed, the arrests are only the beginning of the trouble for Joe and Izzy.

After posting bail, the two abductors are murdered and Izzy disappears. Pike calls on his friend, Elvis Cole, to help learn the truth. What Elvis uncovers is a twisted family story that involves corporate whistleblowing, huge amounts of cash, the Witness Relocation Program, and a long line of lies. But what of all that did Izzy know? Is she a perpetrator or a victim? And how far will Joe go to find out?

Robert Crais is the author of the best-selling Elvis Cole novels. A native of Louisiana, he grew up on the banks of the Mississippi River in a blue collar family of oil refinery workers and police officers. He purchased a secondhand paperback of Raymond Chandler’s The Little Sister when he was fifteen, which inspired his lifelong love of writing, Los Angeles, and the literature of crime fiction. Other literary influences include Dashiell Hammett, Ernest Hemingway, Robert B. Parker, and John Steinbeck.

After years of amateur film-making and writing short fiction, he journeyed to Hollywood in 1976 where he quickly found work writing scripts for such major television series as Hill Street Blues, Cagney & Lacey, and Miami Vice, as well as numerous series pilots and Movies-of-the-Week for the major networks. He received an Emmy nomination for his work on Hill Street Blues, but is most proud of his 4-hour NBC miniseries, Cross of Fire, which the New York Times declared: “A searing and powerful documentation of the Ku Klux Klan’s rise to national prominence in the 20s.”
In the mid-eighties, feeling constrained by the collaborative working requirements of Hollywood, Crais resigned from a lucrative position as a contract writer and television producer in order to pursue his lifelong dream of becoming a novelist. His first efforts proved unsuccessful, but upon the death of his father in 1985, Crais was inspired to create Elvis Cole, using elements of his own life as the basis of the story. The resulting novel, The Monkey’s Raincoat, won the Anthony and Macavity Awards and was nominated for the Edgar Award. It has since been selected as one of the 100 Favorite Mysteries of the Century by the Independent Mystery Booksellers Association.

Crais conceived of the novel as a stand-alone, but realized that—in Elvis Cole—he had created an ideal and powerful character through which to comment upon his life and times. (See the WORKS section for additional titles.) Elvis Cole’s readership and fan base grew with each new book, then skyrocketed in 1999 upon the publication of L. A. Requiem, which was a New York Times and Los Angeles Times bestseller and forever changed the way Crais conceived of and structured his novels. In this new way of telling his stories, Crais combined the classic ‘first person’ narrative of the American detective novel with flashbacks, multiple story lines, multiple points-of-view, and literary elements to better illuminate his themes. Larger and deeper in scope, Publishers Weekly wrote of L. A. Requiem, “Crais has stretched himself the way another Southern California writer—Ross Macdonald—always tried to do, to write a mystery novel with a solid literary base.” Booklist added, “This is an extraordinary crime novel that should not be pigeonholed by genre. The best books always land outside preset boundaries. A wonderful experience.”

Crais followed with his first non-series novel, Demolition Angel, which was published in 2000 and featured former Los Angeles Police Department Bomb Technician Carol Starkey. Starkey has since become a leading character in the Elvis Cole series. In 2001, Crais published his second non-series novel, Hostage, which was named a Notable Book of the Year by the New York Times and was a world-wide bestseller. Additionally, the editors of Amazon.com selected Hostage as the #1 thriller of the year. A film adaptation of Hostage was released in 2005, starring Bruce Willis as ex-LAPD SWAT negotiator Jeff Talley.

Elvis Cole returned in 2003 with the publication of The Last Detective, followed by the tenth Elvis Cole novel, The Forgotten Man, in 2005. Both novels explore with increasing depth the natures and characters of Elvis Cole and Joe Pike. RC’s third stand-alone novel, The Two Minute Rule, was published in 2006, and was followed in 2007 by The Watchman, the first novel in the Elvis Cole/Joe Pike series to feature Joe Pike in the title role.
The novels of Robert Crais have been published in 62 countries and are bestsellers around the world. Robert Crais received the Ross Macdonald Literary Award in 2006 and was named Grand Master by the Mystery Writers of America in 2014.

Currently, Robert Crais lives in the Santa Monica mountains with his wife, two cats, and many thousands of books.