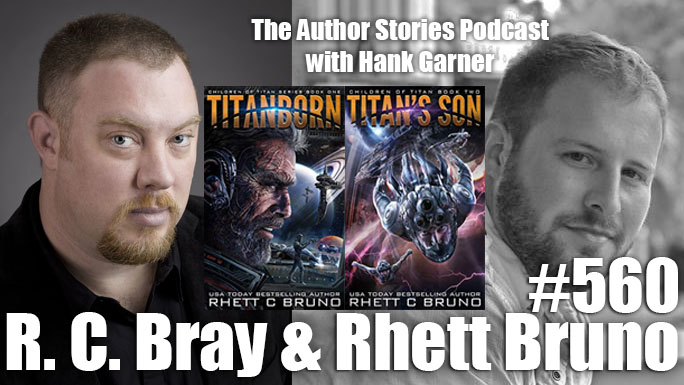 We have a special bonus episode of Author Stories today with my guests R. C. Bray and Rhett Bruno. Rhett’s new series Children of Titan, narrated by R. C. Bray is out now and one of the best science fiction audio series so far this year.  In this episode we talk about the origins of Rhett’s series and why R. C. was the perfect narrator for it. We also delve into R. C.’s journey to being one of the most sought after voices in audiobook performance, narrating The Martian, why the future of publishing is in listening to books, the state of science fiction, fandom, and much more.

For a sneak peek at what we tease at the end of the show, go here.

Offworlders are only worth the price on their heads.

After three decades as a Pervenio Corporation Collector, chasing wanted offworlders and extinguishing protests throughout the solar system, Malcolm Graves doesn’t bother asking questions. So long as the pay is right, he’s the man for the job. But his latest assignment doesn’t afford him that luxury.

A high-profile bombing on Earth has the men who sign Malcolm’s paychecks clamoring for answers. They force him to team up with a strange, augmented partner who’s more interested in statistics than instinct, and ship them both off to Titan to hunt down a suspected group of extremists: Titanborn rebels who will go to any length to free their home from the tyranny of Earth’s corporations.

Heading into hostile territory, Malcolm will have to use everything he’s learned to stay alive. But he soon realizes the situation on the ground is much more complex than he anticipated…and much more personal.

Check out the thrilling first book in a gritty and innovative science-fiction series perfect for fans of The Expanse and Blade Runner. You can also grab it on Audible performed by the award-winning RC Bray, narrator of The Martian.

From an early age award-winning audiobook narrator R.C. Bray despised reading.  Truly hated it with a passion.  And audiobooks?  Even worse.  Those were for people too lazy to read (not to be confused with those like himself who didn’t want to read to begin with).  R.C. eventually got older and wiser and eschewing his capricious convictions fell head-over-heels for reading.  Not just to learn words like “eschew” and “capricious” so he could use them in a bio, but because someone was actually going to be foolish enough to pay him to do it!

Note: R.C.’s gorgeous wife and three beautiful children begged him not to make this his official bio.

Listen to Andy Weir talk about The Martian here

He has been writing since before he can remember, scribbling down what he thought were epic stories when he was young to show to his friends and family. He currently works at an Architecture firm after graduating from Syracuse University, but that hasn’t stopped him from recording the tales bouncing around inside of his head.

Also, please consider subscribing to his newsletter for exclusive access to updates about his work and the opportunity to receive limited content and ARCs. For a limited time, you’ll also receive his Free Starter Library!