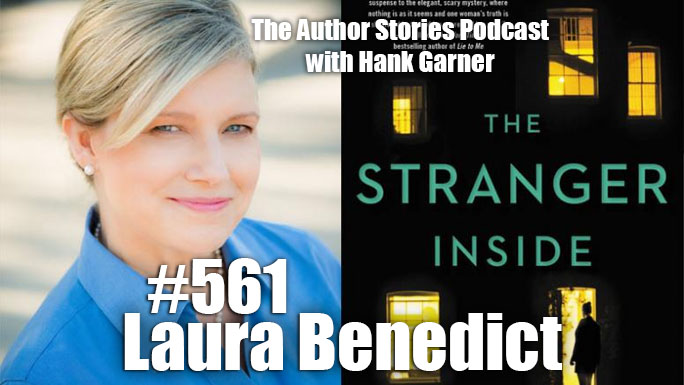 Laura Benedict, author of the fantastic new psychological thriller The Stranger Inside.

What if you came home to find a stranger living inside your house? An “oustanding, ever-twisting, surprise-filled” psychological drama (Publishers Weekly), in the tradition of Shari Lapena and Liane Moriarty, from Edgar- and Thriller Award-nominated author Laura Benedict.

There’s a stranger living in Kimber Hannon’s house. He tells the police that he has every right to be there, and he has the paperwork to prove it. But Kimber definitely didn’t invite this man to move in. He tells her that he knows something about her, and he wants everyone else to know it too.

These words reveal a connection to Kimber’s distant past, and dark secrets she’d long ago left buried. This trespasser isn’t after anything as simple as her money or her charming Craftsman bungalow. He wants to move into her carefully orchestrated life – and destroy it.

Laura Benedict is the Edgar- and ITW Thriller Award- nominated author of eight novels of suspense, including the forthcoming THE STRANGER INSIDE (February 2019). On the lighter side of mystery, Laura wrote SMALL TOWN TROUBLE, a cozy crime novel, for the Familiar Legacy series (January 2018). Her Bliss House gothic trilogy includes: THE ABANDONED HEART, CHARLOTTE’S STORY (Booklist starred review), and BLISS HOUSE. Her short fiction has appeared in Ellery Queen’s Mystery Magazine, and in numerous anthologies like THRILLERS: 100 MUST-READS, THE LINEUP: 20 PROVOCATIVE WOMEN WRITERS, and ST. LOUIS NOIR. A native of Cincinnati, she lives in Southern Illinois with her family. Visit her at www.laurabenedict.com to read her blog and sign up for her quarterly newsletter.