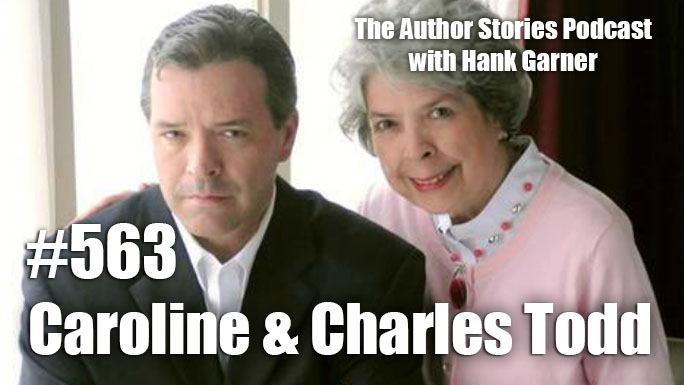 Mother and son writing team Caroline & Charles Todd write and publish under the name Charles Todd. Their newest book, The Black Ascot, is the 21st release in the Inspector Ian Rutledge series.

Scotland Yard’s Ian Rutledge seeks a killer who has eluded Scotland Yard for years in this next installment of the acclaimed New York Times best-selling series.

An astonishing tip from a grateful ex-convict seems implausible – but Inspector Ian Rutledge is intrigued and brings it to his superior at Scotland Yard. Alan Barrington, who has evaded capture for 10 years, is the suspect in an appalling murder during Black Ascot, the famous 1910 royal horse race honoring the late King Edward VII. His disappearance began a manhunt that consumed Britain for a decade. Now, it appears that Barrington has returned to England, giving the Yard a last chance to retrieve its reputation and see justice done. Rutledge is put in charge of a quiet search under cover of a routine review of a cold case.

Meticulously retracing the original inquiry, Rutledge begins to know Alan Barrington well, delving into relationships and secrets that hadn’t surfaced in 1910. But is he too close to finding his man?

His sanity is suddenly brought into question by a shocking turn of events. His sister, Frances, Melinda Crawford, and Dr. Fleming stand by him, but there is no greater shame than shell shock. Questioning himself, he realizes he cannot look back. The only way to save his career – much less his sanity – is to find Alan Barrington and bring him to justice. But is this elusive murderer still in England?

Charles and Caroline Todd are a mother-and-son writing team who live on the east coast of the United States. Caroline has a BA in English Literature and History, and a Masters in International Relations. Charles has a BA in Communication Studies with an emphasis on Business Management, and a culinary arts degree that means he can boil more than water. Caroline has been married (to the same man) for umpteen years, and Charles is divorced.

Charles and Caroline have a rich storytelling heritage. Both spent many evenings on the porch listening to their fathers and grandfathers reminisce. And a maternal grandmother told marvelous ghost stories. This tradition allows them to write with passion about events before their own time. And an uncle/great-uncle who served as a flyer in WWI aroused an early interest in the Great War.

Charles learned the rich history of Britain, including the legends of King Arthur, William Wallace, and other heroes, as a child. Books on Nelson and by Winston Churchill were always at hand. Their many trips to England gave them the opportunity to spend time in villages and the countryside, where there’a different viewpoint from that of the large cities. Their travels are at the heart of the series they began ten years ago.

Charles’s love of history led him to a study of some of the wars that shape it: the American Civil War, WWI and WWII. He enjoys all things nautical, has an international collection of seashells, and has sailed most of his life. Golf is still a hobby that can be both friend and foe. And sports in general are enthusiasms. Charles had a career as a business consultant. This experience gave him an understanding of going to troubled places where no one was glad to see him arrive. This was excellent training for Rutledge’s reception as he tries to find a killer in spite of local resistance.

Caroline has always been a great reader and enjoyed reading aloud, especially poetry that told a story. The Highwayman was one of her early favorites. Her wars are WWI, the Boer War, and the English Civil War, with a sneaking appreciation of the Wars of the Roses as well. When she’s not writing, she’s traveling the world, gardening, or painting in oils. Her background in international affairs backs up her interest in world events, and she’s also a sports fan, an enthusiastic follower of her favorite teams in baseball and pro football. She loves the sea, but is a poor sailor. (Charles inherited his iron stomach from his father.) Still, she has never met a beach she didn’t like.

Both Caroline and Charles share a love of animals, and family pets have always been rescues. There was once a lizard named Schnickelfritz. Don’t ask.

Writing together is a challenge, and both enjoy giving the other a hard time. The famous quote is that in revenge, Charles crashes Caroline’s computer, and Caroline crashes his parties. Will they survive to write more novels together? Stay tuned! Their father/husband is holding the bets.