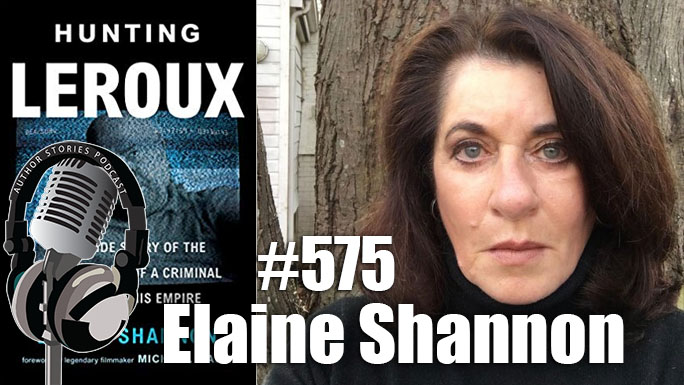 On today’s show we have a fascinating chat with Elaine Shannon, author of the white knuckle story Hunting LeRoux: The Inside Story of the DEA Takedown of a Criminal Genius and His Empire.

With a foreword by four-time Oscar nominated filmmaker Michael Mann.

The story of Paul LeRoux, the twisted-genius entrepreneur and cold-blooded killer who brought revolutionary innovation to international crime, and the exclusive inside story of how the DEA’s elite, secretive 960 Group brought him down.

Paul LeRoux was born in Zimbabwe and raised in South Africa. After a first career as a pioneering cyber-security entrepreneur, he plunged hellbent into the dark side, using his extraordinary talents to develop a disruptive new business model for transnational organized crime. Along the way he created a mercenary force of ex-U.S. and NATO sharpshooters to carry out contract murders for his own pleasure and profit. The criminal empire he built was Cartel 4.0, utilizing the gig economy and the tools of the Digital Age: encrypted mobile devices, cloud sharing and novel money-laundering techniques. LeRoux’s businesses, cyber-linked by his own dark worldwide web, stretched from Southeast Asia across the Middle East and Africa to Brazil; they generated hundreds of millions of dollars in sales of arms, drugs, chemicals, bombs, missile technology and murder. He dealt with rogue nations—Iran and North Korea—as well as the Chinese Triads, Somali pirates, Serb mafia, outlaw bikers, militants, corrupt African and Asian officials and coup-plotters.

Initially, LeRoux appeared as a ghost image on law enforcement and intelligence radar, an inexplicable presence in the middle of a variety of criminal endeavors. He was Netflix to Blockbuster, Spotify to Tower Records. A bold disruptor, his methods brought international crime into the age of innovation, making his operations barely detectable and LeRoux nearly invisible. But he gained the attention of a small band of bold, unorthodox DEA agents, whose brief was tracking down drugs-and-arms trafficking kingpins who contributed to war and global instability. The 960 Group, an element of the DEA’s Special Operations Division, had launched some of the most complex, coordinated and dangerous operations in the agency’s history. They used unorthodox methods and undercover informants to penetrate LeRoux’s inner circle and bring him down.

For five years Elaine Shannon immersed herself in LeRoux’s shadowy world. She gained exclusive access to the agents and players, including undercover operatives who looked LeRoux in the eye on a daily basis. Shannon takes us on a shocking tour of this dark frontier, going deep into the operations and the mind of a singularly visionary and frightening figure—Escobar and Victor Bout along with the innovative vision of Steve Jobs rolled into one. She puts you in the room with these people and their moment-to-moment encounters, jeopardy, frustration, anger and small victories, creating a narrative with a breath-taking edge, immediacy and a stranger-than-fiction reality.

Remarkable, disturbing, and utterly engrossing, Hunting LeRoux introduces a new breed of criminal spawned by the savage, greed-exalting underside of the Age of Innovation—and a new kind of true crime story. It is a look into the future—a future that is dark.

Elaine Shannon is a best-selling author and veteran journalist specializing in national security, organized crime and terrorism. Hunting LeRoux, her latest book, tells the exclusive story of transnational organized crime’s premier innovator, Paul Calder LeRoux, a twisted genius who created the world’s biggest Internet pharmacy, with $300 million in sales during its initial years, then diversified into arms, hard drugs, and murder. She uses her unparalleled sources and access to closely held documents to tell the riveting story of a tech titan who broke bad and did high-dollar deals with Iran, North Korea, the Chinese Triads, Somali pirates, Serb mafia, Colombian cartels, Islamist terrorists in the Philippines and mercenaries of many nations, Shannon takes the reader deep inside the 21st Century criminal underground that supports war, terrorism and chaos.