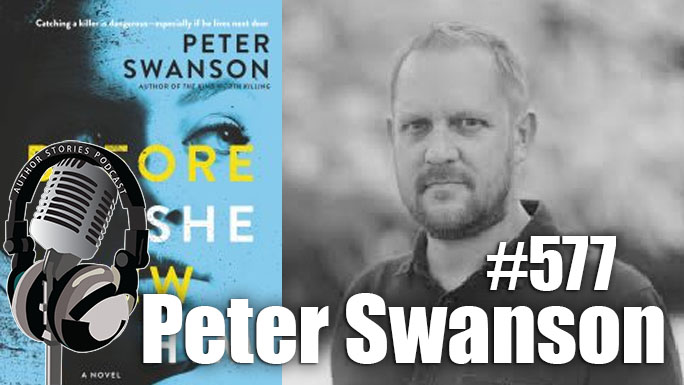 Today Peter Swanson returns to talk about his new book Before She Knew Him.

When Hen and Lloyd move into their new house in West Dartford, Mass., they’re relieved to meet, at their first block party, the only other seemingly-childless couple in their neighborhood, Matthew and Mira Dolamore. Turns out they live in the Dutch Colonial immediately next door.

When they’re invited over for dinner, however, things take a sinister turn when Hen thinks she sees something suspicious in Matthew’s study. Could this charming, mild-mannered College Professor really be hiding a dark secret, one that only Hen, whose been battling her own problems with depression and medication, could know about? Lloyd certainly doesn’t seem to believe her, and so, forced together, Hen and Matthew start to form an unlikely bond. But who, if anyone, is really in danger?

From its deeply unsettling opening, Peter Swanson, the master of contemporary domestic thrillers, fashions a novel as brilliant, dark, coruscating and surprising as Patricia Highsmith and Ira Levin at their very best.

Peter Swanson is the author of five novels, including The Kind Worth Killing, winner of the New England Society Book Award, and finalist for the CWA Ian Fleming Steel Dagger, Her Every Fear, an NPR book of the year; and his most recent, Before She Knew Him. His books have been translated into over 30 languages, and his stories, poetry, and features have appeared in Asimov’s Science Fiction, The Atlantic Monthly, Measure, The Guardian, The Strand Magazine, and Yankee Magazine.

A graduate of Trinity College, the University of Massachusetts at Amherst, and Emerson College, he lives in Somerville, Massachusetts with his wife and cat.