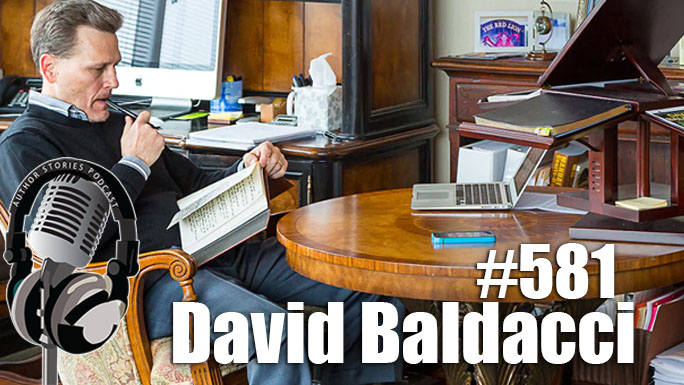 My guest on today’s show is New York Times bestseller David Baldacci. In this episode we talk about his life-long love of storytelling, how he got started writing thrillers, why he decided to writer fantasy and how the gift of a notebook unlocked this epic story, his writing process, his new book The Stars Below, and much more.

From the beginning, the fight was coming. Vega Jane fought her way out of the village where she was born, crossed a wilderness filled with vicious creatures, and raised a ragtag army behind her. But each triumph earned through grit and pain only brought her closer to him.

Necro. A sorcerer whose unspeakable evil is matched only by his magical power.

Vega and Necro are on a collision course. The clash between his awesome power and her iron will is going to shake the stars down. Their fight will seal their fates . . . and determine the future of their world.

The battle rages in The Stars Below, the furious conclusion to legendary storyteller David Baldacci’s #1 global bestselling Vega Jane series.

David Baldacci has been writing since childhood, when his mother gave him a lined notebook in which to write down his stories. (Much later, when David thanked her for being the spark that ignited his writing career, she revealed that she’d given him the notebook to keep him quiet, because “every mom needs a break now and then.”)

David published his first novel, Absolute Power, in 1996. The feature film adaptation followed, with Clint Eastwood as its director and star. In total, David has published 37 novels for adults; all have been national and international bestsellers, and several have been adapted for film and television. His novels are published in over 45 languages and in more than 80 countries, with over 130 million worldwide sales. David has also published seven novels for younger readers.

A lifelong Virginian, David received his Bachelor’s degree from Virginia Commonwealth University and his law degree from the University of Virginia School of Law, after which he practiced law in Washington, D.C.

In addition to being a prolific writer, David is a devoted philanthropist, and his greatest efforts are dedicated to his family’s Wish You Well Foundation®. Established by David and his wife, Michelle, the Wish You Well Foundation supports family and adult literacy in the United States by fostering and promoting the development and expansion of literacy and educational programs. In 2008 the Foundation partnered with Feeding America to launch Feeding Body & Mind, a program to address the connection between literacy, poverty and hunger. Through Feeding Body & Mind, more than 1 million new and gently used books have been collected and distributed through food banks to families in need.

David and his family live in Virginia.