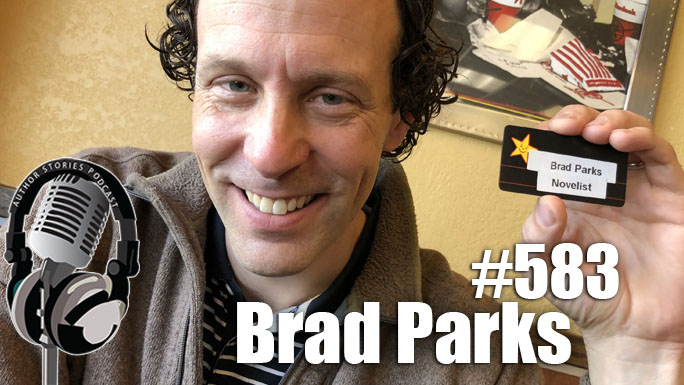 On today’s show Author Brad Parks joins me again to talk about his new book The Last Act.

Check out Brad in Episode 336.

Award-winning author Brad Parks delivers a tense novel of thrills, twists, and deceit that grabs you and won’t let go until the final, satisfying page.

Tommy Jump is an out-of-work stage actor approached by the FBI with the role of a lifetime: Go undercover at a federal prison, impersonate a convicted felon, and befriend a fellow inmate, a disgraced banker named Mitchell Dupree who knows the location of documents that can be used to bring down a ruthless drug cartel. . . if only he’d tell the FBI where they are.

The women in Tommy’s life, his fiancée and mother, tell him he’s crazy to even consider taking the part. The cartel has quickly risen to become the largest supplier of crystal meth in America. And it hasn’t done it by playing nice. Still, Tommy’s acting career has stalled, and the FBI is offering a minimum of $150,000 for a six-month gig—whether he gets the documents or not.

Using a false name and backstory, Tommy enters the low-security prison and begins the process of befriending Dupree. But Tommy soon realizes he’s underestimated the enormity of his task and the terrifying reach of the cartel. The FBI isn’t the only one looking for the documents, and if Tommy doesn’t play his role to perfection, it just may be his last act.

Brad Parks started writing professionally at fourteen, when he discovered two important facts about his hometown newspaper, The Ridgefield (Conn.) Press: One, it paid freelancers fifty cents a column inch for articles about local high school sports; and, two, it ran most submissions at their original length. For Brad, that meant making more money writing than babysitting. For the parents of the girls’ basketball players at Ridgefield High, that meant glowing accounts of their daughters’ games that ran on for no less than forty inches.

This launched Brad on a twenty-year journalism career, one that continued at Dartmouth College, where he founded a weekly sports newspaper he ran out of his dorm room. After graduating Phi Beta Kappa, he was hired by The Washington Post, becoming the youngest writer on the paper’s staff. Two years later, he moved to The (Newark, N.J.) Star-Ledger. A sportswriter who later switched to news, he covered everything from the Super Bowl to the Masters, from small-town pizza wars to Hurricane Katrina. His work was recognized by, among others, the Associated Press Sports Editors, the National Headliner Awards, the National Association of Black Journalists and the New Jersey Press Association, which gave its top award for enterprise reporting to Brad’s forty-year retrospective on the Newark riots. He was also a two-time finalist for the Livingston Award for Young Journalists (sometimes called the “Junior Pulitzers”).

While on assignment for The Star-Ledger in 2004, Brad covered a quadruple homicide in Newark that provided the real-life launching point for Carter Ross, a fictional character who bears no resemblance to Brad beyond their shared height, weight, eye color, hair color, skin color, charmed upbringing, sartorial blandness, and general worldview.

Brad left the newspaper industry in 2008 to pursue fiction-writing. In 2009, he published Faces of the Gone, which sold through its first print run in nine days and went on to win the Nero Award for Best American Mystery and the Shamus Award for Best First Mystery. It made Brad the only author in the combined sixty-year history of those awards to win both prizes for the same book. Library Journal gave Faces of the Gone a starred review, calling it “the most hilariously funny and deadly serious mystery debut since Janet Evanovich’s One for the Money.” Yahoo.com declared Brad was “the literary love child of Evanovich and (Harlan) Coben.”

The next installment of the Carter Ross series, Eyes Of The Innocent, also went back to print nine days after its release. Library Journal cheered it was “as good if not better (than) his acclaimed debut” and The Wall Street Journal called it “engaging.” Meanwhile, readers on a popular book review website voted Carter Ross “The World’s Favorite Amateur Sleuth” in a sixty-four-sleuth, tournament-style bracket, where Brad beat out Agatha Christie’s Miss Marple in the finals (Brad’s explanation of the upset: “I’m on Twitter. Agatha Christie isn’t.”). He was also named one of “Crime Fiction’s Sexiest Authors of 2011,” for which there is no explanation, beyond blindness.

The Girl Next Door, the third Carter Ross adventure, won the Lefty Award for best humorous mystery, as voted on by attendees of the Left Coast Crime conference. It was placed on Kirkus Reviews’ Best Fiction of 2012 list, one of a small handful of mysteries to earn that honor, and reached No. 3 on the Baker & Taylor Fiction/Mystery Bestseller List. Shelf-Awareness gave it a starred review, calling it “perfect for a reader who loves an LOL moment but wants a mystery that’s more than just empty calories.” Booklist lauded it as “a masterpiece” in a starred review. RT Book Reviews warned, “Reading will be compulsive.”

Brad’s fourth book, The Good Cop, won the 2014 Shamus Award for Best Private Eye Novel, making him the only former Best First Shamus winner to subsequently win in the Best Novel category. By also taking the Lefty Award, Brad became the only author besides Janet Evanovich to win back-to-back Leftys, and the first author to win the Lefty and the Shamus for the same book. The Good Copprompted Library Journal to opine, “Parks’s award-winning series is essential reading.” The Associated Press deemed it “a great lighthearted read” while Strand Magazine said it was “destined to be a contender for any ‘Best of 2013’ list.”

The next entry in the series, The Player, received starred reviews from Library Journal (“Parks (is) a gifted storyteller with shades of Mark Twain or maybe Dave Barry”) and Kirkus Reviews (“Muckraking has rarely been so meaty or so funny”). In addition, RT Book Reviews made it a Top Pick!, saying, “Parks has quietly entered the top echelon of the mystery field.” The Washington Post called it “a highly entertaining tale and one of the best portraits of a working reporter since Michael Connelly’s The Poet.”

The sixth and most recent Carter Ross entry, The Fraud, released in 2015. It was a finalist for the 2016 Library of Virginia People’s Choice Award. It has also been nominated for best audio book in the crime/thriller category by the Society of Voice Arts and Sciences—considered the Oscars for voice talent. Reviewers such as Kirkus (“More deeply felt than Carter’s first five cases…”) and Booklist (“… a more serious, reflective tone than previous entries.”) noted Brad’s shift away from his comic voice and the increasing maturity of his themes.

In 2017, Brad published his first standalone thriller, Say Nothing, which was translated into 15 languages and became an international bestseller. It was named a Best Book of 2017 by Kirkus Reviews and Library Journal, the only novel to appear on both lists. In addition, it was named Thriller of the Month by the Sunday Times of London, and Book of the Month by Irish bookseller Eason, and German booksellers Beucher.de and Thalia. The German edition, Nicht Ein Wort, published by Fischer-Verlage, spent six weeks on Der SpiegelBuchreport, the leading German bestseller list. It also won the People’s Choice Award from the Library of Virginia, as voted on by readers. The Washington Post opined, “The novel’s final pages are exciting, surprising and deeply moving. . . Its ending brought me to tears.”

His second standalone, Closer Than You Know, was named one of the best mystery/thrillers of 2018 by Kirkus Reviews, which called it “another irresitible descent into hell.” That was followed by The Last Act, which celebrated its global release in March 2019.

An enthusiastic public speaker, Brad was the Toastmaster at the 2014 Left Coast Crime and has also served as a keynote speaker at numerous other events, including Crested Butte Writers Conference, Creatures Crimes and Crooks Conference, Deadly Ink, Hampton Roads Writers Conference, Hunt Country Writers Retreat, and James River Writers Conference. He and Daniel Palmer have serenaded banquet-goers at the International Thriller Writer’s conference, ThrillerFest, for more years than anyone cares to acknowledge. Brad has also been known to burst into song at bookstores, libraries, and other places where no one was thoughtful enough to muzzle him.

When not writing, he is a slow runner, an even slower swimmer, a father to two and a husband to one. A full time novelist living in Virginia, he divides his time between the shores of the Rappahannock River and Williamsburg. In both places, his favorite writing hauntis a Hardee’s Restaurant, where good-natured staff members suffer his presence for many hours a day.