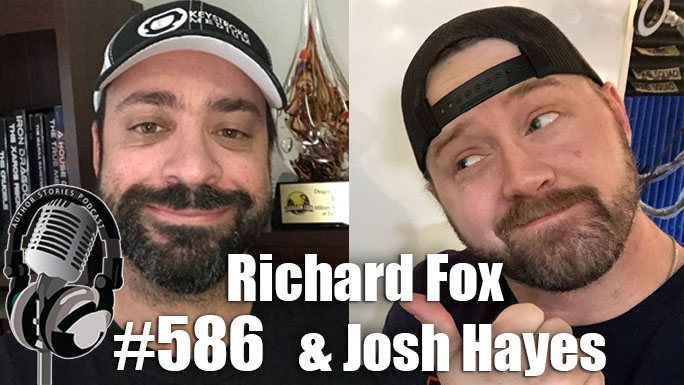 On today’s episode of Author Stories, Richard Fox and Josh Hayes talk about collaborations and their series The Terra Nova Chronicles and new book Wings of Redemption, what it means to be a working writer, writing science fiction, and we dig into some recent controversies in writing and publishing.

The galactic balance of power shifts against humanity’s fledgling colony on Terra Nova.

After narrowly escaping a brutal attack, Chief Kit Carson and her surviving Pathfinders reach the Zeis Homeworld. Their mission is to seek new allies among the uncharted stars continues, but first they must end the insurrection tearing across the planet, threatening the fragile negotiations.

Governor Ken Hale is in a desperate race against time to build up the colony’s defences. When his new soldiers are found dead on the colony’s streets, he must turn to a retired assassin to help hunt down the deranged killer.

And the greatest threat of all, the ancient Ultari Empire, rekindles under the iron rule of a returned Emperor. Their quest for vengeance will burn across the stars…and Terra Nova is the next target.

Wings of Redemption is the third action-packed book in the Terra Nova Chronicles, taking readers deeper into a dangerous new galaxy.

Richard Fox is the winner of the 2017 Dragon Award for Best Military Science Fiction or Fantasy novel, author of The Ember War Saga, a military science fiction and space opera series, and other novels in the military history, thriller and space opera genres.

He lives in fabulous Las Vegas with his incredible wife and three boys, amazing children bent on anarchy.

He graduated from the United States Military Academy (West Point) much to his surprise and spent ten years on active duty in the United States Army. He deployed on two combat tours to Iraq and received the Combat Action Badge, Bronze Star and Presidential Unit Citation.

The Ember War Saga:
1. The Ember War
2. The Ruins of Anthalas
3. Blood of Heroes
4. Earth Defiant
5. The Gardens of Nibiru
6. Battle of the Void
7. The Siege of Earth
8. The Crucible
9. The Xaros Reckoning

Subscribe to Richard’s spam free email list and get free short stories set during the Ember War Saga (and more as they become available) at: http://eepurl.com/bLj1gf

Ever since he watched his first Star Trek episode (TNG not OS), Josh Hayes has loved science fiction. Watching it, reading it, and writing it.

Josh grew up a military brat, affording him the opportunity to meet several different types of people, in multiple states and foreign countries. After graduating high school, he joined the United States Air Force and served for six years, before leaving military life to work in law enforcement. His experiences in both his military life and police life have given him a unique glimpse into the lives of people around him and it shows through in the characters he creates.

When Josh is not writing, he spends his time with his four children and his wife, Jamie.

For more information on Josh and his writing, please visit his webpage: www.joshhayeswriter.com

Josh is also the co-host of Keystroke Medium, with Scott Moon, Ralph Kern and Chuck Manley For the best author interviews, news and craft discussion, visit www.keystrokemedium.com. Their live shows broadcast every Monday night at 8pm CST at www.youtube.com/c/keystrokemedium