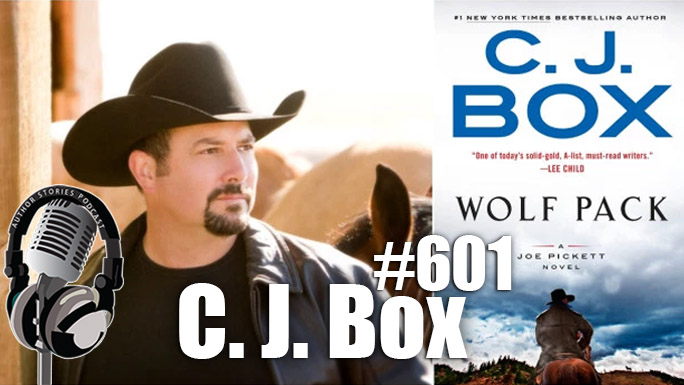 Today’s author interview guest is C. J. Box who returns to the show to talk about his new Joe Pickett novel Wolf Pack.

Listen to C. J.’s first visit to the show here

Wyoming game warden Joe Pickett encounters bad behavior on his own turf–only to have the FBI and the DOJ ask him to stand down–in the thrilling new novel from #1 New York Times-bestselling author C.J. Box.

The good news is that Joe Pickett has his job back, after his last adventure in The Disappeared. The bad news is that he’s come to learn that a drone is killing wildlife–and the drone belongs to a mysterious and wealthy man whose son is dating Joe’s own daughter, Lucy.

When Joe tries to lay down the rules for the drone operator, he’s asked by the FBI and the DOJ to stand down, which only makes him more suspicious. Meanwhile, bodies are piling up in and around Joe’s district in shocking numbers. He begins to fear that a pack of four vicious killers working on behalf of the Sinaloa cartel known as the Wolf Pack has arrived. Their target seems to be the mystery man and everyone–including Joe, Nate, and others–who is associated with him.

Teaming up with a female game warden (based on a real person, one of the few female game wardens at work in Wyoming today) to confront these assassins, Joe finds himself in the most violent and dangerous predicament he’s ever faced.

Box is a Wyoming native and has worked as a ranch hand, surveyor, fishing guide, a small town newspaper reporter and editor, and he owned an international tourism marketing firm with his wife Laurie. In 2008, Box was awarded the “BIG WYO” Award from the state tourism industry. An avid outdoorsman, Box has hunted, fished, hiked, ridden, and skied throughout Wyoming and the Mountain West. He served on the Board of Directors for the Cheyenne Frontier Days Rodeo and is currently serving on the Wyoming Tourism Board. He lives in Wyoming.