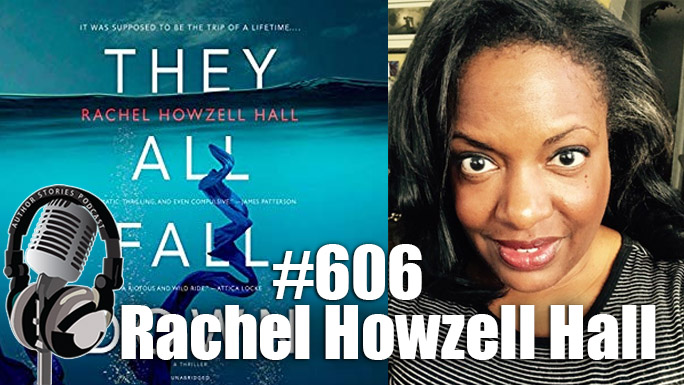 Today’s author interview guest is Rachel Howzell Hall, author of They All Fall Down.

For fans of thrilling contemporary suspense, Rachel Howzell Hall’s brilliant stand-alone novel brings seven sinners to a private island for a reckoning that will leave you breathless.

It was supposed to be the trip of a lifetime.

Delighted by a surprise invitation, Miriam Macy sails off to a luxurious private island off the coast of Mexico with six other strangers. Surrounded by miles of open water in the gloriously green Sea of Cortez, Miriam is soon shocked to discover that she and the rest of her companions have been brought to the remote island under false pretenses―and all seven strangers harbor a secret.

Danger lurks in the lush forest and in the halls and bedrooms of the lonely mansion. Sporadic cell-phone coverage and miles of ocean keeps the group trapped in paradise. And strange accidents stir suspicions, as one by one . . .

They all fall down

RACHEL HOWZELL HALL is the author of seven novels, including the critically-acclaimed Detective Elouise Norton series. Her standalone thriller THEY ALL FALL DOWN will be published April 2019 and pays homage to Agatha Christie’s And Then There Were None. The third in her Lou Norton series, Trail of Echoes, received a coveted Kirkus Star and was one of Kirkus Reviews ‘Books That Kept Us Up All Night.’ Land of Shadows and Skies of Ash (Forge) were included on the Los Angeles Times’ “Books to Read This Summer” for 2014 and 2015, and the New York Times called Lou Norton “a formidable fighter–someone you want on your side.” Lou was also recently included in The Guardian’s Top 10 Female Detectives in Fiction.” She is also collaborating with James Patterson and BookShots on “The Good Sister” in the New York Times bestselling The Family Lawyer.

A featured writer on NPR’s acclaimed ‘Crime in the City’ series and the National Endowment for the Arts weekly podcast, Rachel has also served as a mentor in AWP’s Writer to Writer Program and is currently on the board of directors of the Mystery Writers of America. She was named one of Apple iBooks’ “10 Authors to Read in 2017.” She lives in Los Angeles with her husband and daughter.