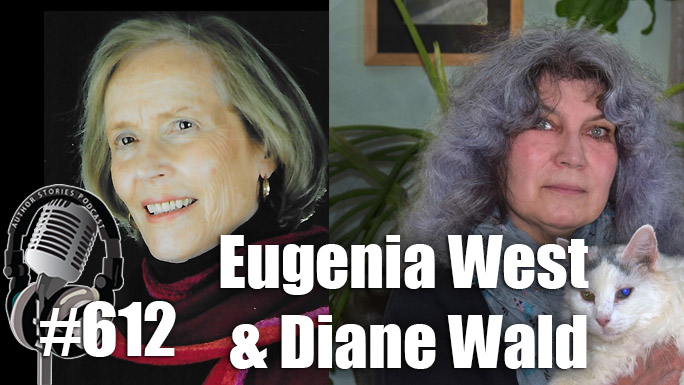 Today we have a special show for you with a double header of author interviews. We begin with Eugenia West, author of Sarah’s War and part two is with Diane Wald, author of Gillyflower.

1777 is a pivotal year in the United States. The Revolutionary War has long since begun, with no end in sight. George Washington and his untrained militia struggle to survive. The thirteen states are torn apart by politics. Amidst all this chaos, Sarah Champion—a beautiful young Patriot and parson’s daughter whose twin brother was killed in the Battle of Long Island—is sent from rural Connecticut to live with a rich Loyalist aunt in Philadelphia. There, she is plunged into a world of intrigue and treachery. She spies on British officers enjoying festivities in winter quarters. She goes to Valley Forge with information about a plot to kill Washington.

As the war drags on, Sarah digs deep for the strength, courage, and wits to overcome the numerous deadly threats she faces, driven on by her determination to realize one dream: being part of the efforts to form a new and independent country.

Eugenia Lovett West was born in Boston, MA, attended Sarah Lawrence College, then worked for Harper’s Bazaar and the American Red Cross. In 1944 came marriage to a dashing Army Air Force fighter pilot. They had four children, traveled extensively, and were together for sixty years. After doing volunteer work, West started writing as a freelance journalist for local weeklies in New Jersey, then made the leap to novels. The first, The Ancestors Cry Out, was published by Doubleday and Ballantine. Without Warning and Overkill came from St. Martin’s Press; a third in the Emma Streat series is in the pipeline. West spends summers at Squam Lake in Holderness, New Hampshire, and winters in Essex, Connecticut. Her greatest joys are her children, grandchildren, and large, close, extended family. She values kindness and is doing her best to age with grace―and to keep writing.

Boston, 1984. Even in a world without cell phones, messages come through loud and clear if one is listening. When thirty-something Nora Forrest travels to Manhattan to see a Broadway play starring her idol, an aging Irish actor named Hugh Sheenan, she doesn’t know whether what happens in the theater that night should be credited to witchcraft, extrasensory perception, synchronicity, or simple accident―and she knows that many people would tell her nothing had happened at all. Told through the voices of four people, Gillyflower is a story about intersections and connections―real, imaginary, seized, and eluded. It’s a book about everyday magic, crystalline memory, and the details that flow through time and space like an electrified mist. It’s a detective story, a love story, and a coming-of-age story―for the never really young and for the almost old.

Diane Wald was born in Paterson, NJ, and has lived in Massachusetts since 1972. She holds an M.F.A. from the University of Massachusetts, Amherst. She has published over 250 poems in literary magazines since 1966. She was the recipient of a two-year fellowship in poetry from the Fine Arts Work Center in Provincetown and has been awarded the Grolier Poetry Prize, The Denny Award, and The Open Voice Award. She also received a state grant from the Artists Foundation (Massachusetts Council on the Arts). She has published four chapbooks (Target of Roses from Grande Ronde Press, My Hat That Was Dreaming from White Fields Press, Double Mirror from Runaway Spoon Press, and faustinetta, gegenschein, trapunto from Cervena Barva Press) and won the Green Lake Chapbook Award from Owl Creek Press. An electronic chapbook (Improvisations on Titles of Works by Jean Dubuffet) appears on the Mudlark website. She received the first annual Anne Halley Poetry Prize from the Massachusetts Review. Her book Lucid Suitcase was published by Red Hen Press in 1999 and her book, The Yellow Hotel, was published by Verse Press in the fall of 2002. Her book WONDERBENDER was published in 2011 by 1913 Press. She has taught at Boston University, The Art Institute of Boston, and Northeastern University. Gillyflower, her first novel, will be released in April 2019. Visit the GIllyflower website: www.gillyflowernovel.weebly.com