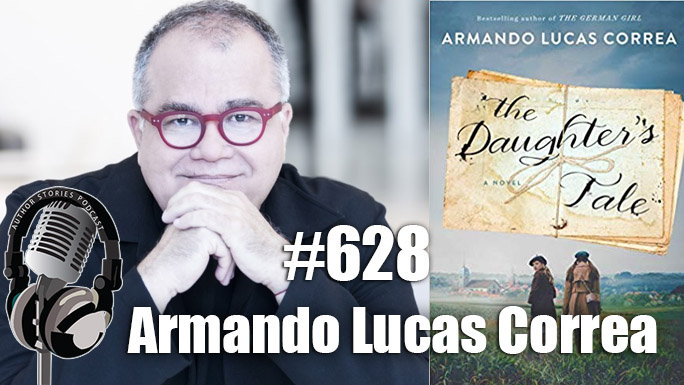 On today’s show author and editor of People en Español Armando Lucas Correa stops back by to talk about The Daughter’s Tale, the second in a trilogy of books about the immigrants from Germany during Nazi occupation. This powerful book, like his previous book The German Girl will leave an indelible mark on you after reading.

“The Daughter’s Tale is immersive, both heartbreaking and redemptive, steeped in harrowing historical events and heroic acts of compassion that will have you reflecting on the best and worst the human heart has to offer. Fans of WWII history and book clubs will find depth and skillful storytelling here, but on a deeper level, searing questions about life, love, and the choices we make in the most impossible of circumstances.” —Lisa Wingate, New York Times bestselling author of Before We Were Yours

From the internationally bestselling author of The German Girl, an unforgettable family saga exploring a hidden piece of World War II history and the lengths a mother will go to protect her children—perfect for fans of Lilac Girls, We Were the Lucky Ones, and The Alice Network.

BERLIN, 1939. The dreams that Amanda Sternberg and her husband, Julius, had for their daughters are shattered when the Nazis descend on Berlin, burning down their beloved family bookshop and sending Julius to a concentration camp. Desperate to save her children, Amanda flees toward the south of France, where the widow of an old friend of her husband’s has agreed to take her in. Along the way, a refugee ship headed for Cuba offers another chance at escape and there, at the dock, Amanda is forced to make an impossible choice that will haunt her for the rest of her life. Once in Haute-Vienne, her brief respite is inter­rupted by the arrival of Nazi forces, and Amanda finds herself in a labor camp where she must once again make a heroic sacrifice.

NEW YORK, 2015. Eighty-year-old Elise Duval receives a call from a woman bearing messages from a time and country that she forced herself to forget. A French Catholic who arrived in New York after World War II, Elise is shocked to discover that the letters were from her mother, written in German during the war. Despite Elise’s best efforts to stave off her past, seven decades of secrets begin to unravel.

Based on true events, The Daughter’s Tale chronicles one of the most harrowing atrocities perpetrated by the Nazis during the war. Heart­breaking and immersive, it is a beautifully crafted family saga of love, survival, and redemption.

Armando Lucas Correa is a Cuban writer, journalist and editor who resides in New York. His first novel, The German Girl  (Atria Books, Simon & Schuster), is an international bestseller that has been translated to fourteen languages and published in more than twenty countries. His second novel,  The Daughter’s Tale (Atria Books, Simon & Schuster) will be published on May 7, 2019. His first book  In Search of Emma: Two Fathers, One Daughter and the Dream of a Family (Rayo, Harper Collins) was published in 2009.

Correa is the recipient of various outstanding achievement awards from the National Association of Hispanic Publications and the Society of Professional Journalism. Most recently, he was recognized by AT&T with The Humanity of Connection Award.
In Cuba, he entered the world of print journalism in 1988 when he was appointed the editor of Tablas, a national theater and dance magazine based out of Havana.

His career as an American journalist started in 1991 in El Nuevo Herald, The Miami HeraldSpanish edition newspaper. He moved to New York in 1997, to work as a senior writer at People en Español magazine and has been the brand’s Editor in Chief since 2007.

He currently resides in Manhattan with his partner and their three children.