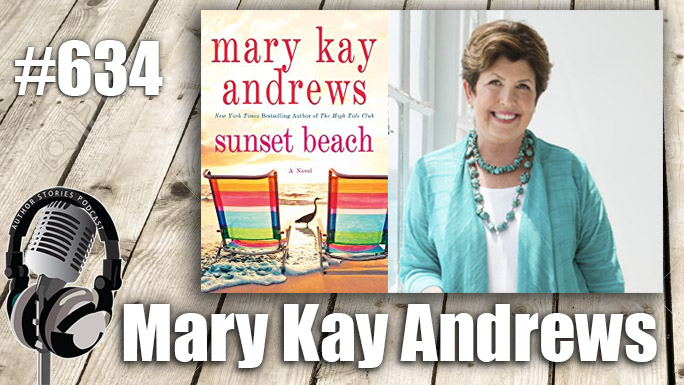 Today my author interview guest is Mary Kay Andrews, author of Sunset Beach and more than 25 other novels.

Pull up a lounge chair and have a cocktail at Sunset Beach – it comes with a twist.

Drue Campbell’s life is adrift. Out of a job and down on her luck, life doesn’t seem to be getting any better when her estranged father, Brice Campbell, a flamboyant personal injury attorney, shows up at her mother’s funeral after a twenty-year absence. Worse, he’s remarried – to Drue’s eighth grade frenemy, Wendy, now his office manager. And they’re offering her a job.

It seems like the job from hell, but the offer is sweetened by the news of her inheritance – her grandparents’ beach bungalow in the sleepy town of Sunset Beach, a charming but storm-damaged eyesore now surrounded by waterfront McMansions.

With no other prospects, Drue begrudgingly joins the firm, spending her days screening out the grifters whose phone calls flood the law office. Working with Wendy is no picnic either. But when a suspicious death at an exclusive beach resort nearby exposes possible corruption at her father’s firm, she goes from unwilling cubicle rat to unwitting investigator, and is drawn into a case that may – or may not – involve her father. With an office romance building, a decades-old missing persons case re-opened, and a cottage in rehab, one thing is for sure at Sunset Beach: there’s a storm on the horizon.

A native of St. Petersburg, Florida, she received a B.A. in journalism from The University of Georgia and was a newspaper reporter for 14 years. The last ten years of her career were spent as a features reporter for The Atlanta Journal-Constitution.

She is married to her high school sweetheart, Tom Trocheck, with whom she has a 40-year (and counting) collaboration yielding two grown children, two adorable grandchildren and countless memorable kitchen experiences.

After a 14-year career working as a reporter at newspapers including The Savannah Morning News, The Marietta Journal and The Atlanta Journal-Constitution, where she spent the final ten years of her career, she left journalism in 1991 to write fiction.

Her first novel, EVERY CROOKED NANNY, was published in 1992 by HarperCollins Publishers. She went on to write ten critically acclaimed mysteries under her real name. In 2002, she assumed the pen name Mary Kay Andrews with the publication of SAVANNAH BLUES. In 2006, HISSY FIT became her first New York Times bestseller, followed by eleven more New York Times, USA Today and Publisher’s Weekly bestsellers. To date, her novels have been published in German, Italian, Polish, Slovenian, Hungarian, Dutch, Czech and Japanese.

Mary Kay Andrews’ first cookbook, THE BEACH HOUSE COOKBOOK, published by St. Martin’s Press, goes on sale May 2. She and her family divide their time between Atlanta and Tybee Island, where they cook up new recipes in two restored beach homes, The Breeze Inn and Ebbtide, both named after fictional places in Mary Kay’s novels. In between cooking and plotting her next novel, Mary Kay is an intrepid treasure hunter whose favorite pastime is junking and fixing up old houses.