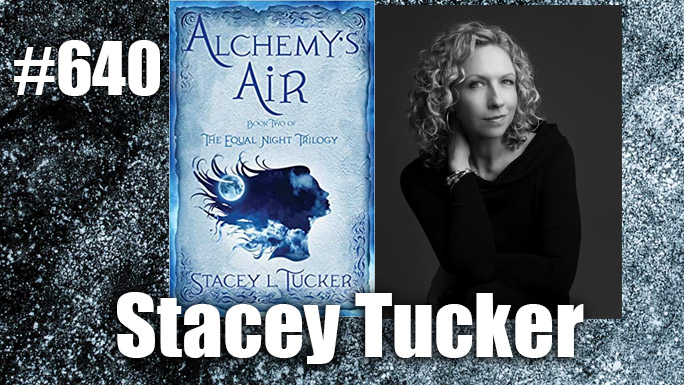 Today’s author interview is with Stacey L. Tucker. Stacey returns to the show to talk about her new book Alchemy’s Air: Book Two of the Equal Night Trilogy.

Skylar Southmartin is not the naïve girl she was a short year ago. She’s made some mistakes and learned a few secrets to life, all the while clinging to the faith her mother instilled in her as a child . . . in herself. And now that she has discovered her life’s purpose within the pages of the ancient Book of Sophia, she knows what she must do: restore a vital memory to the Akashic Library, located deep within the Underworld of Earth. This library is sought after by many who are aware of its existence, for they know the future of human potential rests at its core.

Meanwhile, Devlin Grayer has been elected as the 46th President of the United States and his wife, Milicent, is miserable in her new role as First Lady―especially because the Great Mothers have asked Milicent to use her new status to help their cause, and she has no interest in tackling that task.

With the help of friends in the unlikeliest of places, Skylar’s journey reveals the significance of the darkness within all of us, and its potential to save or destroy the most precious part of us all: our soul.

Stacey Tucker used her fifteen years of field research in women’s history, spirituality, and energy work to create her three book series, The Equal Night Trilogy. The romantic fantasy story combines science and spirituality in a relatable way for the modern reader. Tucker’s first book in the series, Ocean’s Fire, took Gold at the Living Now Book Awards, and she’s making magic again with Book 2, Alchemy’s Air. She has written for Women’s World, Working Mother, and Pop Sugar, and speaks to teen groups about self-empowerment and awareness in today’s saturated climate of social media.