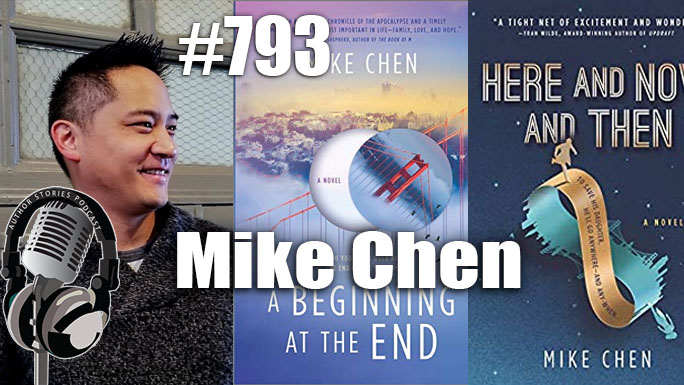 Today’s author interview guest is Mike Chen, author of A Beginning At The End.

How do you start over after the end of the world?

“Not just an apocalyptic thriller, but also a timely reminder of what is most important in life—family, love, and hope.” —Peng Shepherd, author of The Book of M

Six years after a global pandemic wiped out most of the planet’s population, the survivors are rebuilding the country, split between self-governing cities, hippie communes and wasteland gangs.In postapocalyptic San Francisco, former pop star Moira has created a new identity to finally escape her past—until her domineering father launches a sweeping public search to track her down. Desperate for a fresh start herself, jaded event planner Krista navigates the world on behalf of those too traumatized to go outside, determined to help everyone move on—even if they don’t want to. Rob survived the catastrophe with his daughter, Sunny, but lost his wife. When strict government rules threaten to separate parent and child, Rob needs to prove himself worthy in the city’s eyes by connecting with people again.Krista, Moira, Rob and Sunny are brought together by circumstance, and their lives begin to twine together. But when reports of another outbreak throw the fragile society into panic, the friends are forced to finally face everything that came before—and everything they still stand to lose. Because sometimes having one person is enough to keep the world going.

Mike Chen is a lifelong writer, from crafting fan fiction as a child to somehow getting paid for words as an adult. He has contributed to major geek websites (The Mary Sue, The Portalist, Tor) and covered the NHL for mainstream media outlets. A member of SFWA and Codex Writers, Mike lives in the Bay Area, where he can be found playing video games and watching Doctor Who with his wife, daughter, and rescue animals. Follow him on Twitter and Instagram: @mikechenwriter