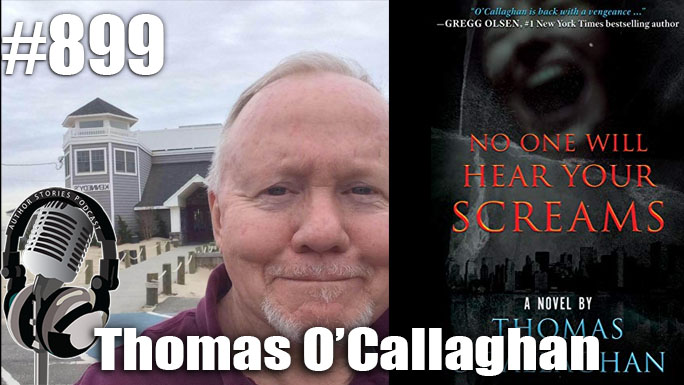 Today’s author interview guest is Thomas O’Callaghan, author of No One Will Hear Your Screams.

“O’Callaghan is back with a vengeance …”— Gregg Olsen, #1 New York Times bestselling author

Is there a sociopathic killer on the loose and murdering prostitutes in New York City? NYPD’s top cop, Homicide Commander Lieutenant John Driscoll, believes there is. Someone who calls himself “Tilden” and claims to have been sexually abused as a child by his mother’s john. But what could have triggered Tilden’s rage that has him on a mission to eradicate all the women of the night in The Big Apple?

More importantly, will Driscoll put an end to the madness? He soon discovers Tilden’s not the run-of-the-mill sociopath. After all, would a common murderer have taken the time to embalm his victims, which the New York City chief medical examiner determined was the cause of their deaths?

Driscoll, a man haunted by the events of an unstable childhood himself, must put aside any sympathy he may have for Tilden and put a stop to his murderous rampage. Teamed up with Sergeant Margaret Aligante and Detective Cedric Thomlinson, who have their own issues, the commander sets out to stop the killings and bring Tilden to justice before he kills again.

Thomas O’Callaghan’s work has been translated for publication in Germany, Slovakia, Indonesia, the Czech Republic, China, and Italy. As an internationally acclaimed author, Mr. O’Callaghan is a member of both the Mystery Writers of America and the International Thriller Writers associations. A native of New York City and a graduate of Richmond College, Mr. O’Callaghan resides with his lovely wife, Eileen, a stone’s throw from the Atlantic Ocean in beautiful Belle Harbor, New York. His debut novel, BONE THIEF, republished by WildBlue Press on April 28, 2020, introduces NYPD Homicide Commander Lieutenant John W. Driscoll. THE SCREAMING ROOM, the second in the John Driscoll series, was republished by WildBlue Press on May 5, 2020. The third book in the series, NO ONE WILL HEAR YOUR SCREAMS, was released by WildBlue Press on May 9, 2020.

The Road To Publication
Recipe for getting your book published: Baste it now and again . . . then let it bake for twelve years!

I was never much of a reader until one day, in the early eighties, I picked up a copy of Helter Skelter, by Vincent Bugliosi and Curt Gentry. This is an often used adage, but I couldn’t put it down. The author’s attention to detail fascinated me. After that, I was hooked on novels depicting murder, mayhem and suspense. I soon discovered such notables as Thomas Harris, John Sandford, Lawrence Block and Ed McBain, just to name a few. Unlike, Helter Skelter, where the storyline was based on an actual murder, Harris, Sandford, Block, McBain and company, created murder and the intrigue that surrounded it. I was enthralled all the more. Read on, I said, and so I did.

After I finished reading my twelfth 87th Precinct novel, I thought: I could do that! And so, on a gloomy, rain-soaked Friday afternoon, that happened to follow Thanksgiving, I began writing Nightkills, which would later become Bone Thief.

No one had even heard of ‘cut and paste’ back then, at least I hadn’t, so a typewriter was the vehicle to write on. So, there I sat, pounding away on an old Smith Corona, a large supply of correction fluid at the ready. Some would say I’m a bit of a perfectionist. The large quantity of the Liquid Paper supports that assertion, I suppose. In any case, after three hours of pecking away at the keys: Voila! My opening chapter. s I recall, it had something to do with a woman returning videos to a local retailer. As she was returning to her car, she was abducted. We meet her again, bound and gagged in chapter two. That’s how it was written for Nightkills and, after a bit of editing, that’s how it’s featured in Bone Thief.

On I went with my writing. Along the way, I had the luxury of having flexible hours on my real job, a quiet room in which to write and a very supportive wife. If she hadn’t gifted me my first laptop one Christmas, I’d still be using the correction fluid. And, I hope my former boss doesn’t find out, but I used my “field time” to write what was sure to be a blockbuster. In my mind, at least.

I’ve discovered much along the twelve year trail toward publication. I learned when to use lay and not lie. I found out that laptops don’t operate at peak efficiency after being dropped on a tile floor. And, that friends like to be featured in your book. Even if they appear as a corpse.

A background in sales helped me deal with something that new, idealistic, hopeful and naive first-time novelists don’t plan on: Rejection. And lots of it! You see, there’s a nurturing chain that exists on the road to getting published. It starts with the writer pecking away at a somewhat confusing arrangement of the alphabet, twisting and turning those little letters into words, paragraphs and chapters. Sometimes, not necessarily in that order. Next, when you think you’ve put the final spin on your collection of words, you visit the number two guy on the chain, the fellow at the copy center. I once read that a very famous author, whose name eludes me right now, once mailed an original manuscript to his editor and . . . you guessed it. It got lost in the mail. The author hadn’t kept a copy so the novel went unpublished. That’s why the guy at the copy center holds an important place on the chain. You see him, excitedly explain how important it is that he gets the ‘copy’ part right and he says “color or black and white”. Now you’re puzzled. Would it actually look better in color? You opt for black and white. It’s your first book, your baby, but you’re not Rockefeller. You go for 8 cents a copy on heavyweight, bright white and hope for the best. An hour or two later, you’ve got a copy, or perhaps several. Where to now?

The number three person, the point man if you’re a basketball enthusiast, is the literary agent. Here, you’ve done your homework. You’ve gone to Barnes and Noble and purchased any one of a number of books detailing how to get your work published and each and every book suggests submitting your manuscript to an agent. Letting the agent submit it to the publishing house gives you a better shot at seeing the work in print. What you hadn’t planned on is the agent not liking the book. Good grief! Why not? It’s brilliant writing, you reason. Not so, in the eyes of the agent. Here’s where the years start to accumulate. Rewrite after rewrite after rewrite. Remember, writers write, but published writers rewrite. Got the rewriting part down? Good. Armed with a copy of the current year’s Guide to Literary Agents, you narrow down your search for literary representation, (some new words you have discovered). You target one, two, three, or a dozen agents that are open to receiving work in your particular genre and you send them a query letter. (Something else that’s new to you.) Here’s where the tough part starts. You’ve decided to target a dozen agents, or if you’re me, a hundred. In either case, your query letter produces either a friendly ‘no thank you’ or . . . a ‘please send the entire manuscript’. If the latter applies, you’ve broken ground. Number three person on the nurturing chain likes your idea for a story well enough to want to read all of it. Wow! You’re in a hurry now. You’re very pleased that you let the number two guy make the copies because you want to get the manuscript out to your agent before he changes his mind. Or, God forbid, someone else publishes a book exactly like yours!!! You sprinkle some holy water on the box, cram your manuscript inside, and hand it over to FedEx for an overnight delivery. Then you sit by the phone and wait and wait and wait. Did I say wait? No one warns you about the waiting part, unless you scrutinized the notation in your Guide to Literary Agents, where it says: “This agent responds in four months to requested manuscript.”

Over the next several months you’ve amassed enough paper rejection slips to wallpaper your office, either from the agent that agreed to read your book, or others whose door you chose to knock on. Along the way, though, a helpful agent suggests you seek the help of an editor, a book doctor of sorts. It’ll give the book marketable legs, you’re told. If you’re like me, you’ll follow the advice. I hooked up with a wonderful freelance editor named Dick Marek. He helped me successfully forge the manuscript into a book.

An agent, a real, in-the-book, bonafide agent writes to say that he wants to represent your work and market it to the publishing world. You scream. Your first impulse is to tip the mailman. You plan dinner out with your spouse. You tell everyone you know that you’re now represented and that it’s just a matter of time before your book hits the shelves. Finally, after rewriting the work again, this time to satisfy the agent, your agent, he sends it out to one or more publishing houses. The rejection slips come in. But, if you have a considerate agent fielding the slips, like I had in Matt Bialer of Sanford J. Greenburger Associates, you don’t see them.

Then it really happens!

You get the call.

Numero four on the chain. An editor of a publishing house, in New York, no less, likes the book and wants to offer you a deal. In my case, that editor was Michaela Hamilton of Kensington Books. A delightful person to know, and an insightful person to work with.

You wait. From this point on, it takes a considerable amount of time and energy and a bit more re-writing to get the book on the shelf. But, this time the effort and the waiting aren’t as difficult. You have a contract. Anxiety isn’t casting its shadow over the immediate future.

In closing, let me give you some further words of wisdom. Along the way, you’ll discover that you talk to yourself; who better to bounce dialogue off at three in the morning? You’ll resolve a plot issue while showering. What will you do? I’ll tell you what you’ll do. You’ll skip the conditioner, climb out, and write down the resolution while a puddle forms at your feet. Then, the word that’s been escaping you all day, pops into your head just before falling asleep. Mark my words. You’ll hop out of bed and write it down and while you’re up, you’ll find yourself writing down other words. Strings of them! You’ll need a bigger piece of paper! Don’t tell my former boss, but I use the flip side of the business cards from my old job. And one thing more you should be made aware of. You’ll meet some truly amazing people along the way and as your book nears the stores you’ll make some very good friends in many of them.

Three cheers to the chain!