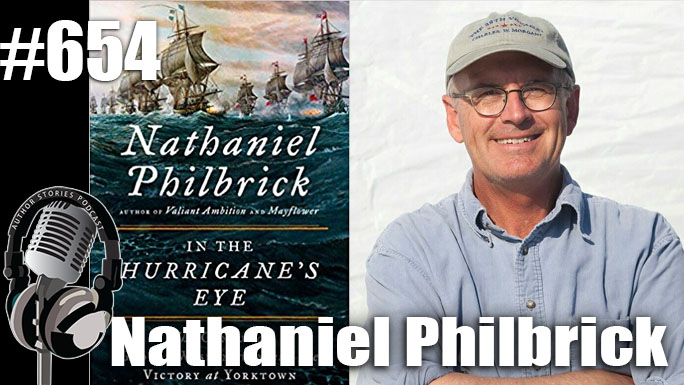 Today’s author interview guest is Nathaniel Philbrick, author of In the Hurricane’s Eye: The Genius of George Washington and the Victory at Yorktown (The American Revolution Series).

“Nathaniel Philbrick is a masterly storyteller. Here he seeks to elevate the naval battles between the French and British to a central place in the history of the American Revolution. He succeeds, marvelously.”–The New York Times Book Review

The thrilling story of the year that won the Revolutionary War from the New York Timesbestselling author of In the Heart of the Sea and Valiant Ambition.

In the fall of 1780, after five frustrating years of war, George Washington had come to realize that the only way to defeat the British Empire was with the help of the French navy. But as he had learned after two years of trying, coordinating his army’s movements with those of a fleet of warships based thousands of miles away was next to impossible. And then, on September 5, 1781, the impossible happened. Recognized today as one of the most important naval engagements in the history of the world, the Battle of the Chesapeake–fought without a single American ship–made the subsequent victory of the Americans at Yorktown a virtual inevitability.

In a narrative that moves from Washington’s headquarters on the Hudson River, to the wooded hillside in North Carolina where Nathanael Greene fought Lord Cornwallis to a vicious draw, to Lafayette’s brilliant series of maneuvers across Tidewater Virginia, Philbrick details the epic and suspenseful year through to its triumphant conclusion. A riveting and wide-ranging story, full of dramatic, unexpected turns, In the Hurricane’s Eye reveals that the fate of the American Revolution depended, in the end, on Washington and the sea.

Nathaniel Philbrick was born in Boston, Massachusetts, and grew up in Pittsburgh, Pennsylvania, where he attended Linden Elementary School and Taylor Allderdice High School.  He earned a BA in English from Brown University and an MA in America Literature from Duke University, where he was a James B. Duke Fellow. He was Brown University’s first Intercollegiate All-American sailor in 1978, the same year he won the Sunfish North Americans in Barrington, RI. After working as an editor at Sailing World magazine, he wrote and edited several books about sailing, including The Passionate Sailor, Second Wind, and Yaahting: A Parody.

In 1986, Philbrick moved to Nantucket with his wife Melissa and their two children.  In 1994, he published his first book about the island’s history, Away Off Shore, followed in 1998 by a study of the Nantucket’s native legacy, Abram’s Eyes. He was the founding director of Nantucket’s Egan Maritime Institute and is still a research fellow at the Nantucket Historical Association.

In 2000, Philbrick published the New York Times bestseller, In the Heart of the Sea, which won the National Book Award for nonfiction. The book was the basis of the 2015 movie of the same title directed by Ron Howard.  The book also inspired a 2001 Dateline special on NBC as well as the 2010 PBS American Experience film “Into the Deep” by Ric Burns.

His next book Sea of Glory was published in 2003 and won the Theodore and Franklin D. Roosevelt Naval History Prize and the Albion-Monroe Award from the National Maritime Historical Society.

In 2010, he published the New York Times bestseller The Last Stand, which was named a New York Times Notable book, a 2010 Montana Book Award Honor Book, and a 2011 ALA Notable Book.  Philbrick was an on-camera consultant to the 2-hour PBS American Experience film “Custer’s Last Stand” by Stephen Ives.

In 2011 Philbrick’s Why Read Moby-Dick? was a finalist for the New England Society Book Award and was named to the 2012 Listen List for Outstanding Audiobook Narration from the Reference and User Services Association, a division of the ALA.  That year Penguin also published a new edition of his first work of history, Away Off Shore.

In 2013 Philbrick published the New York Times bestseller, Bunker Hill:  A City, a Siege, a Revolution, which was awarded both the 2013 New England Book Award for Non-Fiction and the 2014 New England Society Book Award as well as the 2014 Distinguished Book Award of the Society of Colonial Wars.

In March 2018, Penguin published a new edition of his sailing memoir Second Wind: A Sunfish Sailor, an Island, and the Voyage that Brought a Family Together, and in October 2018, Viking will publish his third book about the American Revolution, In the Hurricane’s Eye:  The Genius of George Washington and the Victory at Yorktown.

Philbrick’s writing has appeared in Vanity Fair, The New York Times Book Review, The Wall Street Journal, the Los Angeles Times, and The Boston Globe. He has appeared on the Today Show, the Morning Show, Dateline, PBS’s American Experience, C-SPAN, and NPR. He and his wife Melissa still live on Nantucket.