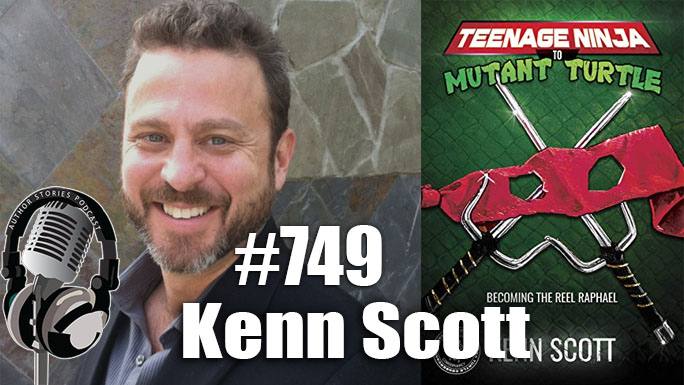 Today my guest is Kenn Scott, author of the new book Teenage Ninja to Mutant Turtle: Becoming the Reel Raphael.

Being a Ninja Turtle can be hell…

Just ask Kenn Scott, who portrayed Raphael in the original hit films of the 1990s!

Sucking on oxygen tanks between takes, sweating out 10 pounds a day, and having a near-death experience doesn’t sound like a Hollywood dream, but for Kenn Scott, it was everything he hoped for…and more!

Ever since he was a kid, Kenn dreamed of being a Hollywood action hero! He took acting lessons, studied karate, and figured out a plan to sneak into a movie studio to get his big break. The hard work paid off and Kenn found himself in a green rubber suit, kicking ass as Raphael the Ninja Turtle, in the most successful independent film of the time.

With a relentless production schedule, grueling working conditions, and breakdowns in the state-of-the-art animatronics used to animate the turtle heads, making the Teenage Mutant Ninja Turtles films was no walk in the park. Performers suffered injuries, illness, and exhaustion to meet the demanding needs of the production.

Now, in this candid book, Kenn shares entertaining, educational, and humorous stories of the blood, sweat, tears, and laughs shared by him and a crew of dedicated artists, as they brought some of the world’s most beloved comic book characters to life on the silver screen.

Kenn Scott was born in New York, grew up in North Carolina, and chased his dreams to Hollywood, California. With a lifelong desire to be a movie action hero, Kenn trained in martial arts, took acting classes, and studied film production, until all the work paid off and he found himself playing “Raphael” in the original Ninja Turtles films of the early 1990s. After that, working as a Hollywood stuntman and actor, Kenn appeared and starred in other films, including the martial arts cult hit Showdown. He then moved behind the camera to write and direct for movies, television, and even the CIA! Today Kenn is creative director of an advertising agency in Fort Worth, TX. He practices martial arts, eats pizza, supports causes he believes in, and still loves to travel, meet friends, and visit with turtle fans all over the world.