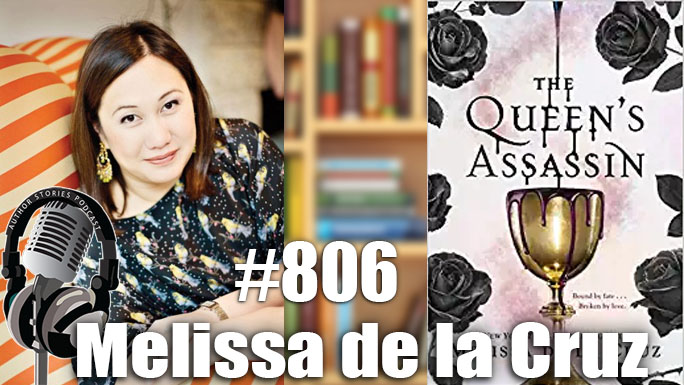 Today’s author interview guest is Melissa de la Cruz. Melissa returns to the show to talk about her new Young Adult Fantasy series with the first book The Queen’s Assassin.

Perfect for fans of Sarah J. Maas and Red Queen, this is the first novel in a sweeping YA fantasy-romance duet about a deadly assassin, his mysterious apprentice, and the country they are sworn to protect from #1 NYT bestselling author Melissa de la Cruz.

Caledon Holt is the kingdom’s deadliest weapon. No one alive can best him in speed, strength, or brains, which is why he’s the Hearthstone Guild’s most dangerous member. Cal is also the Queen’s Assassin, bound to her by magic and unable to leave her service until the task she’s set for him is fulfilled.

Shadow of the Honey Glade has been training all her life to join the Guild, hoping that one day she’ll become an assassin as feared and revered as Cal. But Shadow’s mother and aunts expect her to serve the crown as a lady of the Renovian Court.

When a surprise attack brings Shadow and Cal together, they’re forced to team up as assassin and apprentice. Even though Shadow’s life belongs to the court and Cal’s belongs to the queen, they cannot deny their attraction to each other. But now, with war on the horizon and true love at risk, Shadow and Cal will uncover a shocking web of lies that will change their paths forever.

De la Cruz is the author of the Blue Bloods series (with three million copies in print), among many others. Her first series for adults launched with Witches of East End, which People magazine called a “bubbling cauldron of mystery and romance.” The bestseller was followed by Serpent’s Kiss and Winds of Salem. Lifetime Television aired a two-season drama series based on Witches of East End, starring Julia Ormond, Jenna Dewan-Tatum, Rachel Boston and Mädchen Amick. De la Cruz’s young adult spin-off of the series, Summer on East End has also been optioned for television.