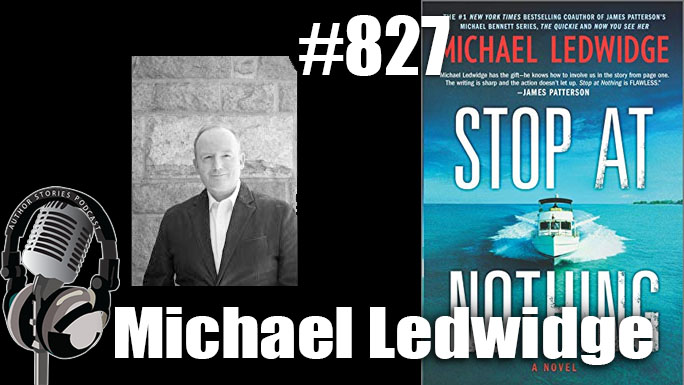 Today’s author interview guest is Michael Ledwidge, author of Stop at Nothing: A Novel.

When a Gulfstream jet goes down in the Bahamas carrying a fortune in cash and ill-gotten diamonds, expat diving instructor Michael Gannon is the only person on the scene. Assuming himself the beneficiary of a drug deal gone bad, Gannon thinks he’s home free with the sudden windfall until he realizes he forgot to ask one simple question.

Who were the six dead men on the plane?

Gannon soon learns the answer to that fateful question as he is thrust into an increasingly complex and deadly game of cat and mouse with a group of the world’s most powerful and dangerous men who will stop at nothing to catch him.

But as the walls close in, Gannon reveals a few secrets of his own. Before he retired to the islands, Gannon had another life, one with a lethal set of skills that he must now call back to the surface if he wants to make it out alive.

As a decade-long James Patterson writing partner, Michael Ledwidge is a pro at writing fast-paced, in-the-moment prose, tightly choreographed action set pieces and plot twists that drop at exactly the right moment. With this novel, he kicks off an unstoppable, gripping new thriller series.

Michael Ledwidge sold his first novel, The Narrowback, at the age of 26.

He wrote 14 bestselling novels with the world’s best selling author, James Patterson. The Michael Bennett series he co -created is the highest selling NYC detective series of all time.

Born and raised in New York City, Ledwidge has worked as a Park Avenue doorman and a Manhattan outdoor telephone technician where he participated in the Ground Zero recovery efforts after the 9/11 terrorist attacks.

Married with three children, he currently lives in Connecticut.