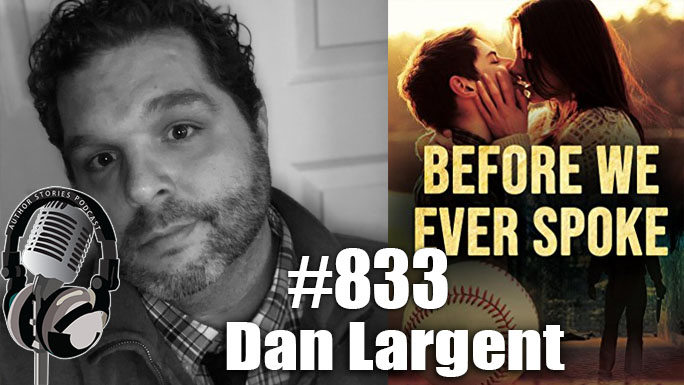 Today’s author interview guest is Dan Largent, author of Before We Ever Spoke.

After a chance encounter, three people soon find out that life can sometimes thrust us into the public eye – even when taking great measures to avoid it.

Cooper Madison was the best pitcher in baseball after being drafted number one overall in 1996 from the small Gulf Coast town of Pass Christian, Mississippi. One year after announcing his sudden and shocking retirement, he finds himself seeking anonymity in Cleveland, Ohio.

Cara Knox is the youngest sibling to three older brothers. After a tragic work accident to her closest relative, she has built up a tough exterior as she begins her final year of college at Cleveland State University.

Jason Knox, Cara’s oldest brother, is the lead detective on Cleveland’s Edgewater Park Killer case. After months without a suspect, he is feeling the heat from his media-hungry chief.

Serendipity intervenes, and all three learn that perception and reality are paths that rarely ever intersect.

His bestselling debut novel, BEFORE WE EVER SPOKE, was released in June of 2018 to rave reviews from readers and critics, alike. The sequel, AFTER EDGEWATER, has received high praise since its release in June of 2019.

Dan has appeared on TV and radio programs across the country to discuss his books and share his unique journey.

After years of listening to people tell him that he should write a book, he certainly hopes those same folks will buy them now that he actually has…

Dan was born during the “Blizzard of 1978” to his parents, Jeff and Anne, before spending the majority of his childhood in nearby Strongsville, Ohio. Prior to starting 9th grade, Dan moved back to his birthplace of Berea and graduated in 1996 from Berea High School.

Dan completed his undergraduate degree in Elementary Education (Grades 1-8) at THE Otterbein University, where he was also a 4 year letterman in football, President of Alpha Sigma Phi fraternity, a DJ on the former 101.5 FM The Rock, RA, Assistant Hall Director, and an esteemed member of the Otterbein Food Service Advisory Board (true story).

After a failed attempt to play football professionally, Dan came to his senses and began his true calling as a 7th-grade teacher. In addition to teaching, Dan was an assistant football coach and also the Head Baseball Coach at Olmsted Falls High School from 2010-2017. During his first season at the helm, the Bulldogs reached the school’s first ever State Final Four and Dan received the Greater Cleveland Division I Coach of the Year award.

In 2013, Dan was honored to receive the PTA Teacher of the Year award for the Olmsted Falls City School District. That same year he was also recognized as the NEOEA Positive Image Award winner for positive contributions to the teaching profession in Northeast Ohio.

Despite those accolades, Dan feels that his greatest accomplishment is being a father to his three children: Brooke, Grace, and Luke.