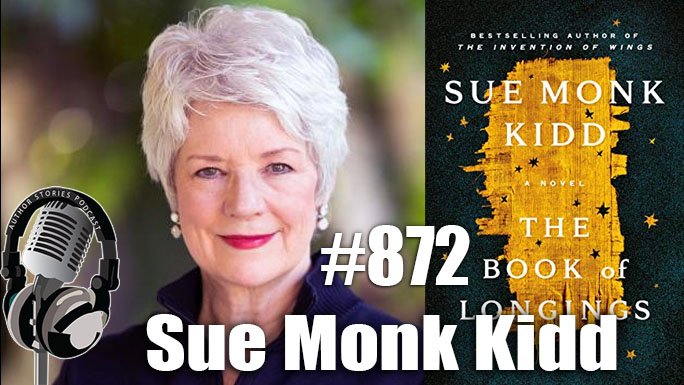 Today’s author interview guest is Sue Monk Kidd, author of The Book of Longings: A Novel.

“An extraordinary novel . . . a triumph of insight and storytelling.” —Associated Press

An extraordinary story set in the first century about a woman who finds her voice and her destiny, from the celebrated number one New York Times bestselling author of The Secret Life of Bees and The Invention of Wings

In her mesmerizing fourth work of fiction, Sue Monk Kidd takes an audacious approach to history and brings her acclaimed narrative gifts to imagine the story of a young woman named Ana. Raised in a wealthy family with ties to the ruler of Galilee, she is rebellious and ambitious, with a brilliant mind and a daring spirit. She engages in furtive scholarly pursuits and writes narratives about neglected and silenced women. Ana is expected to marry an older widower, a prospect that horrifies her. An encounter with eighteen-year-old Jesus changes everything.

Their marriage evolves with love and conflict, humor and pathos in Nazareth, where Ana makes a home with Jesus, his brothers, and their mother, Mary. Ana’s pent-up longings intensify amid the turbulent resistance to Rome’s occupation of Israel, partially led by her brother, Judas. She is sustained by her fearless aunt Yaltha, who harbors a compelling secret. When Ana commits a brazen act that puts her in peril, she flees to Alexandria, where startling revelations and greater dangers unfold, and she finds refuge in unexpected surroundings. Ana determines her fate during a stunning convergence of events considered among the most impactful in human history.

Grounded in meticulous research and written with a reverential approach to Jesus’s life that focuses on his humanity, The Book of Longings is an inspiring, unforgettable account of one woman’s bold struggle to realize the passion and potential inside her, while living in a time, place and culture devised to silence her. It is a triumph of storytelling both timely and timeless, from a masterful writer at the height of her powers.

Sue Monk Kidd was raised in the small town of Sylvester, Georgia, a place that deeply influenced the writing of her first novel The Secret Life of Bees. She graduated from Texas Christian University in 1970 and later took creative writing courses at Emory University and Anderson College, as well as studying at Sewanee, Bread Loaf, and other writers conferences. In 2016, TCU conferred on her an honorary doctor of letters degree.

Her book When the Heart Waits, published by Harper SanFrancisco in 1990 has become a touchstone on contemplative spirituality. In 1996, Harper published The Dance of the Dissident Daughter, describing Kidd’s journey into feminist theology, a memoir that had a groundbreaking effect within religious circles.

In her forties, Kidd turned her attention to writing fiction, winning the South Carolina Fellowship in Literature and the 1996 Poets & Writers Exchange Program in Fiction. Her short stories appeared in TriQuarterly, Nimrod, and other literary journals and received a Katherine Anne Porter award and citations in Best American Short Stories’ 100 Distinguished Stories.

When her first novel, The Secret Life of Bees, was published by Viking in 2002, it became a genuine literary phenomenon, spending more than 2½ years on the New York Times bestseller list. It has been translated into 36 languages and sold more than 8 million copies worldwide. Bees was named the Book Sense Paperback Book of the Year in 2004, long-listed for the 2002 Orange Prize in England, and won numerous awards. For over a decade, the novel was produced on stage by The American Place Theater, and in 2008 it was adapted into a movie by Fox Searchlight, which won the People’s Choice award for best movie and the NAACP Image award for best picture. The 2019 off-broadway production at The Atlantic Theater won the AUDELCO VIV award for best musical. The novel is taught widely in middle school, high school, and college classrooms.

Kidd’s second novel, The Mermaid Chair, has sold well over a million copies since its publication by Viking in 2005, reaching #1 on the New York Times bestseller list and remaining on the hardcover and paperback lists for nine months. Winner of the 2005 Quill Award for General Fiction, the novel was longlisted for the International IMPAC Dublin Literary Award, translated into 24 languages, and made into a television movie by Lifetime.

The spiritual essays, meditations, and inspirational stories Kidd wrote in her thirties were collected into a single volume, Firstlight: The Early Inspiration Writings and published by Guideposts Books in 2006 and Penguin in 2007.

After traveling with her daughter, Ann Kidd Taylor, to sacred sites in Greece, Turkey, and France, Kidd and Taylor co-authored a memoir, Traveling with Pomegranates: A Mother-Daughter Story. Published by Viking in 2009, it appeared on numerous bestseller lists, including the New York Times list and has been published in several languages.

The Invention of Wings, Kidd’s third novel was published in 2014 by Viking to wide critical acclaim. It debuted at #1 on the New York Times bestseller list where it spent a total of 9 months. It has sold over a million copies and been translated into over 20+ languages thus far. The novel has won several literary awards, including the Florida Book of Year Award and the SIBA Book Award. It was also nominated for the International Dublin Literary Award and was chosen for Oprah’s Book Club 2.0.

Kidd’s much anticipated novel, The Book of Longings, was published April 21, 2020.

Kidd serves on the Writers Council for Poets & Writers, Inc. She lives in North Carolina with her husband, Sandy, and dog, Barney.