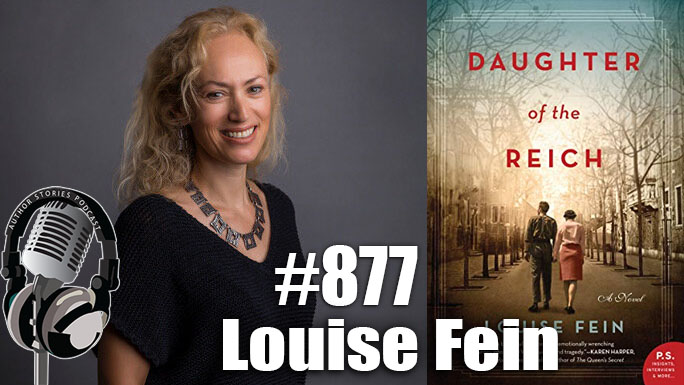 Today’s author interview guest is Louise Fein, author of Daughter of the Reich.

“A beautifully written and emotional wrenching journey into World War II tumult and tragedy…its dynamic characters present a timely truth we should all grasp and embrace: We must stand up against those who preach hate.” —Karen Harper, New York Times bestselling author of The Queen’s Secret

For fans of The Nightingale and All the Light We Cannot See, a spellbinding story of impossible love set against the backdrop of the Nazi regime.

As the dutiful daughter of a high-ranking Nazi officer, Hetty Heinrich is keen to play her part in the glorious new Thousand Year Reich. But she never imagines that all she believes and knows about her world will come into stark conflict when she encounters Walter, a Jewish friend from the past, who stirs dangerous feelings in her. Confused and conflicted, Hetty doesn’t know whom she can trust and where she can turn to, especially when she discovers that someone has been watching her.

Realizing she is taking a huge risk—but unable to resist the intense attraction she has for Walter—she embarks on a secret love affair with him. Together, they dream about when the war will be over and plan for their future. But as the rising tide of anti-Semitism threatens to engulf them, Hetty and Walter will be forced to take extreme measures.

Propulsive, deeply affecting, and inspired by the author’s family history, Daughter of the Reich is a mesmerizing page-turner filled with vivid characters and a meticulously researched portrait of Nazi Germany. In this riveting story of passion, courage and morality, Louise Fein introduces a bold young woman determined to tread the treacherous path of survival and freedom, showing readers the strength in the power of love and reminding us that the past must never be forgotten.

Louise Fein was born and brought up in London. She harboured a secret love of writing from a young age, preferring to live in her imagination than the real world. After a law degree, Louise worked in Hong Kong and Australia, travelling for a while through Asia and North America before settling back to a working life in London. She finally gave in to the urge to write, taking an MA in creative writing, and embarking on her first novel, Daughter of the Reich (named People Like Us in the UK and Commonwealth edition). The novel was inspired by the experience of her father’s family, who escaped from the Nazis and arrived in England as refugees in the 1930’s. Louise lives in the beautiful English countryside with her husband, three children, small dog and the local wildlife who like to make an occasional appearance in the house. Louise is currently working on her second novel.