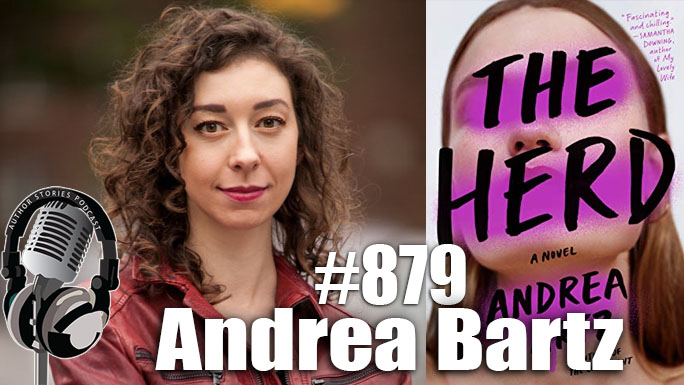 Today’s author interview guest is Andrea Bartz, author of The Herd: A Novel.

An exclusive New York women’s workspace is rocked by the mysterious disappearance of its enigmatic founder, leaving two sisters to uncover the haunting truth

“Fascinating and chilling.”—Samantha Downing, author of My Lovely Wife

The name of the elite, women-only coworking space stretches across the wall behind the check-in desk: THE HERD, the H-E-R always in purple. In-the-know New Yorkers crawl over one another to apply for membership to this community that prides itself on mentorship and empowerment. Among the hopefuls is Katie Bradley, who’s just returned from the Midwest after a stint of book research blew up in her face. Luckily, Katie has an in, thanks to her sister, Hana, an original Herder and the best friend of Eleanor Walsh, the Herd’s charismatic founder.

Eleanor is a queen among the Herd’s sun-filled rooms, admired and quietly feared even as she strives to be warm and approachable. As head of PR, Hana is working around the clock to prepare for a huge announcement from Eleanor—one that will change the trajectory of the Herd forever. Though Katie loves her sister’s crew, she secretly hopes that she’s found her next book subject in Eleanor, who’s brilliant, trailblazing—and extremely private.

Then, on the night of the glitzy Herd news conference, Eleanor vanishes without a trace. Everybody has a theory about what made Eleanor run, but when the police suggest foul play, everyone is a suspect: Eleanor’s husband, other Herders, the men’s rights groups that have had it out for the Herd since its launch—even Eleanor’s closest friends. As Hana struggles to figure out what her friend was hiding and Katie chases the story of her life, the sisters must face the secrets they’ve been keeping from each other—and confront just how dangerous it can be when women’s perfect veneers start to crack, crumble, and then fall away altogether.

Andrea Bartz is a Brooklyn-based journalist and author of the forthcoming thriller THE HERD, which is coming in March 2020 and has been named a most anticipated book of the year by Marie Claire, Newsweek, HelloGiggles, Book Riot, and other titles. Her debut thriller, THE LOST NIGHT (Crown, 2019), is being developed for TV by Mila Kunis. It was named a best book of the year by Real Simple, Glamour, Marie Claire, Library Journal, Crime Reads, Popsugar, She Reads, and other publications. Her work has appeared in The Wall Street Journal, Vogue, Cosmopolitan, Women’s Health, Martha Stewart Living, Elle, and many other outlets, and she’s held editorial positions at Glamour, Psychology Today, and Self, among other titles.