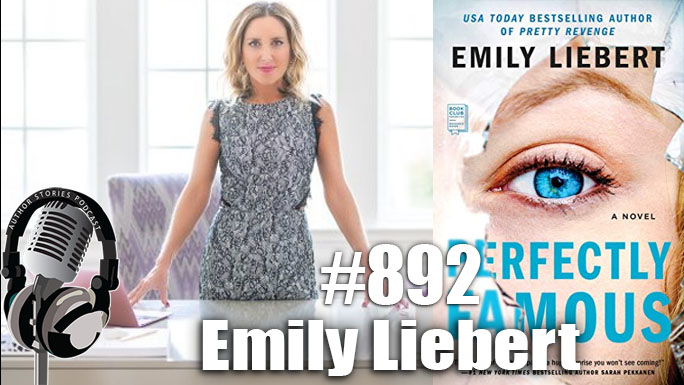 From the USA TODAY bestselling author of Pretty Revenge—a “gripping tale of subterfuge, betrayal, and retribution” (Liv Constantine, bestselling author of The Last Mrs. Parrish)—comes the story of a journalist obsessed with finding a crime novelist who disappears after a deadly attack on her beloved daughter.

As a mother and a famous author, Ward DeFleur has it all. She lives in a beautiful estate in picture-perfect Connecticut, along with her teenage daughter, Stevie, where nothing can go wrong. Until, one night, when Stevie is brutally murdered and Ward’s entire world is shattered. Consumed by panic and grief, Ward vows never to put pen to paper again.

Bree is a recently-divorced, former-journalist-cum-housewife, desperate to fill her days with something other than Pilates classes and grocery shopping. So she decides to start writing for the town newspaper. What begins as Bree’s effort to tell Ward’s tragic narrative turns into a fixation with finding her favorite author. Unfortunately, Ward doesn’t want to be found. Even worse, Stevie’s killer is still on the loose…

This harrowing tale of one woman’s infatuation and another woman’s fear is full of explosive surprises, perfect for fans of The Night Olivia Fell and Then She Was Gone.

Emily Liebert is the USA TODAY bestselling author of six books. FACEBOOK FAIRYTALES, YOU KNEW ME WHEN, WHEN WE FALL, THOSE SECRETS WE KEEP, SOME WOMEN & PRETTY REVENGE. Her forthcoming novel, PERFECTLY FAMOUS, releases June 2, 2020.

She was born and raised in New York City, attended the Horace Mann School and Smith College, where she graduated with a B.A. in English Language & Literature.

After college, Emily landed her first job as an Executive Assistant at ABC News, where she honed her organizational skills and helped produce television specials for Peter Jennings Reporting. To this day, she is a whiz with “To Do” lists.

Since childhood, Emily’s had a passion for writing, so when the opportunity to become Editor-in-Chief of The WAG–a luxury lifestyle magazine covering Westchester and Fairfield Counties–presented itself, she jumped at the chance. During Emily’s five-year tenure, she wrote hundreds of articles, including celebrity profiles, travel, fashion, and beauty.

In 2009, Emily edited Kerry Kennedy’s New York Times bestseller Being Catholic Now: Prominent Americans Talk About Change in the Church and the Quest for Meaning.

The following year, Emily published her first book, FACEBOOK FAIRYTALES, which was featured at the 2010 Frankfurt Book Fair, and Emily was one of 20 guests of honor–among Elizabeth Kostova, Russell Banks, and Lisa See–at the renowned Literary Feast 2010, a privilege reserved for best-selling and buzz-worthy authors.

Shortly thereafter, Emily was hired by Microsoft as the spokesperson for Bing’s partnership with Facebook and appeared in 30+ television and radio spots for the brand, which garnered exceptional ratings.

When Emily’s not writing, she teaches Pure Barre classes and enjoys traveling, cooking, eating, and reading. She’s been known to ride on a Harley Davidson. And she does a mean Running Man on the dance floor. Emily lives with her husband, Lewis, and their two sons, Jax and Hugo, in Westport, CT where she moved kicking and screaming for fear that there would be no Chinese food delivery at three in the morning. She was right.