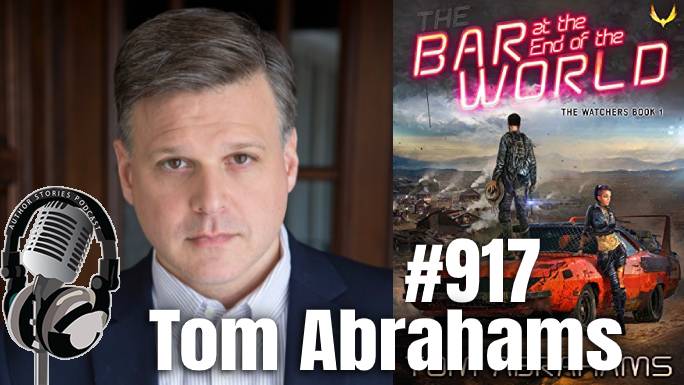 Today’s author interview guest is Tom Abrahams, author of The Bar at the End of the World (The Watchers Book 1).

A starving city. A renegade bootlegger. A battle for the future of mankind.

Zeke is a bad guy. He didn’t choose to be. It’s just who he is. It’s who he has to be to survive in a post-apocalyptic world where trust is as scarce as water.

He’s got nobody. No family. No friends. And he left behind the woman he loved for her own good.

But it’s time to change. After a brush with death far out in the wasteland, he decides he’s done risking his life to help his greedy bosses control who gets to drink water and when.

Now, he’s stranded in a bar in the middle of nowhere, surrounded by the perfect kind of ruffians who can help him go back and make things right. Armed with renewed purpose and a one-of-a-kind muscle car, Zeke hunts for redemption, seeks retribution and, maybe, just maybe, he can get his girl back while he’s at it.

Take a ride across the wasteland in Tom Abrahams’ newest post-apocalyptic, dystopian series, but with a fantasy twist. It will leave you wondering just what it means to be human.

Tom Abrahams is an Emmy and Edward R. Murrow award winning television journalist and member of International Thriller Writers. He is also a Kindle Unlimited All-Star, an Audible 5 Star Favorite, and author of more than two dozen novels. He writes in several genres including dystopian, sci-fi techno-thriller, post-apocalyptic, and political thrillers. His stories combine the realistic with the fantastic and have sold copies all over the world. The dramatic rights for his “A Dark World” trilogy are optioned for television and film. He’s married with two children and lives in Southeast Texas.