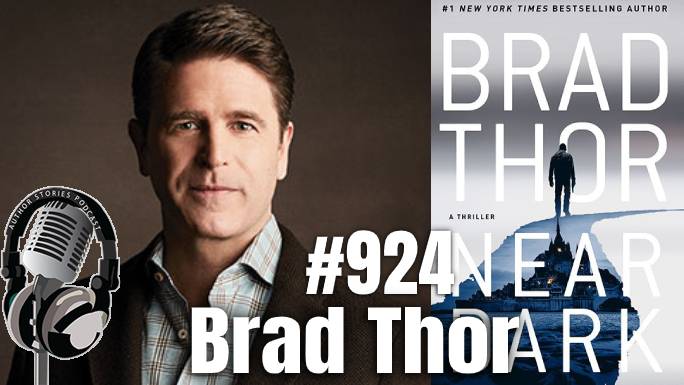 Today’s guest is Brad Thor, returning to the show for a wide ranging chat including his new book Near Dark: A Thriller (The Scot Harvath Series Book 19).

“Fast-paced…pulse-pounding…supremely entertaining… His best ever.” —The Washington Times

The world’s largest bounty has just been placed upon America’s top spy. His only hope for survival is to outwit, outrun, and outlast his enemies long enough to get to the truth.

But for Scot Harvath to accomplish his most dangerous mission ever—one that has already claimed the lives of the people closest to him, including his new wife—he’s going to need help—a lot of it.

Not knowing whom he can trust, Harvath finds an unlikely ally in Norwegian intelligence operative Sølvi Kolstad. Just as smart, just as deadly, and just as determined, she not only has the skills, but also the broken, troubled past to match Harvath’s own.

Brad Thor is the #1 New York Times bestselling author of twenty thrillers, including: NEAR DARK, BACKLASH (One of Suspense Magazine‘s Best Books of the Year), SPYMASTER (“One of the all-time best thriller novels” – The Washington Times), THE LAST PATRIOT (nominated Best Thriller of the Year by the International Thriller Writers Association), BLOWBACK (One of the “Top 100 Killer Thrillers of All Time” – NPR), and THE LIONS OF LUCERNE (“One of the best political thrillers ever” – Barnes & Noble).

Brad has appeared on ABC, CBS, NBC, PBS, FOX News Channel, FOX Business Channel, CNN, CNN Headline News, The Blaze, and MSNBC (among others) to discuss terrorism, as well as how closely his novels of international intrigue parallel the real threats facing the world today.

Brad has served as a member of the Department of Homeland Security’s Analytic Red Cell Unit. He has also lectured to law enforcement organizations on over-the-horizon/future threats, and has been a keynote speaker for the National Tactical Officers Association annual conference.

In 2008, Brad shadowed a Black Ops team in Afghanistan to research his thriller, The Apostle.