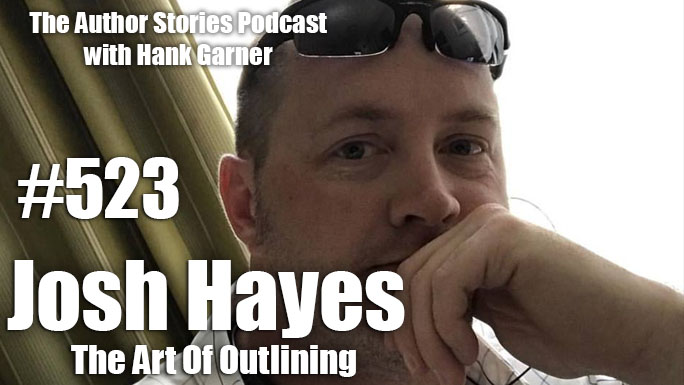 Today’s guest is author and podcaster, Josh Hayes. This month we are doing a special series of shows where we tackle a specific topic dealing with the craft of writing. The age-old debate still rages on with writers taking sides about which is better, planning or pantsing. Josh joins us today to talk about outlining and his process for planning out his work.

Terra Nova. The promised world is humanity’s new home, safe from the threats of a dangerous galaxy, where veterans of a long war could live in peace. The promise was a lie.

Chief Katherine “Kit” Carson, of the elite Pathfinder Corps, joins the mission as a last-minute replacement, hoping to put a spotty past behind her and build a new life on a brave new world.

The expedition arrives on Terra Nova, expecting to join the first wave of colonists, instead they find abandoned cities and are soon faced with a new, terrifying enemy humanity has never encountered before.

For the colony to survive, Carson must unravel the mystery of her new home and learn the fate of the first mission to settle the planet…

Terra Nova is the first chapter in an exciting new series of space exploration, alien first contact and adventure across brave new worlds. Join the team and read today!

Ever since he watched his first Star Trek episode (TNG not OS), Josh Hayes has loved science fiction. Watching it, reading it, and writing it.

Josh grew up a military brat, affording him the opportunity to meet several different types of people, in multiple states and foreign countries. After graduating high school, he joined the United States Air Force and served for six years, before leaving military life to work in law enforcement. His experiences in both his military life and police life have given him a unique glimpse into the lives of people around him and it shows through in the characters he creates.

When Josh is not writing, he spends his time with his four children and his wife, Jamie.

For more information on Josh and his writing, please visit his webpage: www.joshhayeswriter.com

Josh is also the co-host of Keystroke Medium, with Scott Moon, Ralph Kern and Chuck Manley For the best author interviews, news and craft discussion, visit www.keystrokemedium.com. Their live shows broadcast every Monday night at 8pm CST at www.youtube.com/c/keystrokemedium