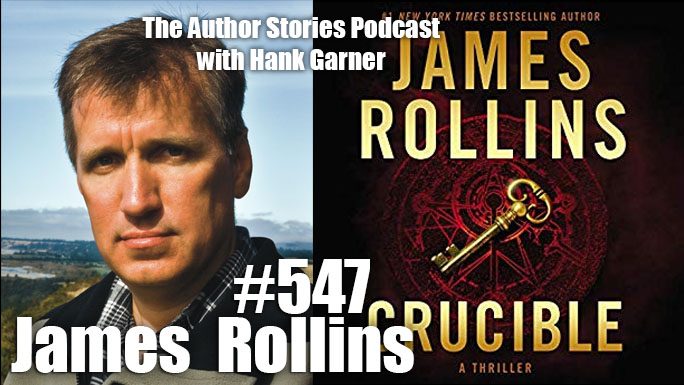 I am honored to welcome James Rollins back to the show today to talk about his brand new Sigma Force novel Crucible.

In the race to save one of their own, Sigma Force must wrestle with the deepest spiritual mysteries of mankind in this mind-expanding adventure from the #1 New York Times bestselling author, told with his trademark blend of cutting edge science, historical mystery, and pulse-pounding action.

Arriving home on Christmas Eve, Commander Gray Pierce discovers his house ransacked, his pregnant lover missing, and his best friend’s wife, Kat, unconscious on the kitchen floor. With no shred of evidence to follow, his one hope to find the woman he loves and his unborn child is Kat, the only witness to what happened. But the injured woman is in a semi-comatose state and cannot speak—until a brilliant neurologist offers a radical approach to “unlock” her mind long enough to ask a few questions.

What Pierce learns from Kat sets Sigma Force on a frantic quest for answers that are connected to mysteries reaching back to the Spanish Inquisition and to one of the most reviled and blood-soaked books in human history—a Medieval text known as the Malleus Maleficarum, the Hammer of Witches. What they uncover hidden deep in the past will reveal a frightening truth in the present and a future on the brink of annihilation, and force them to confront the ultimate question: What does it mean to have a soul?

James Rollins is the #1 New York Times bestselling author of international thrillers, translated into more than forty languages, with more than 20 million copies sold. The New York Times says, “Rollins is what you might wind up with if you tossed Michael Crichton and Dan Brown into a particle accelerator together,” and NPR calls his work “Adventurous and enormously engrossing.” Rollins unveils unseen worlds, scientific breakthroughs, and historical secrets–and does it all at breakneck speed and with stunning suspense. A practicing veterinarian, Rollins has pursued scuba, spelunking, and other adventures around the world, and currently lives and writes in Lake Tahoe, Nevada.