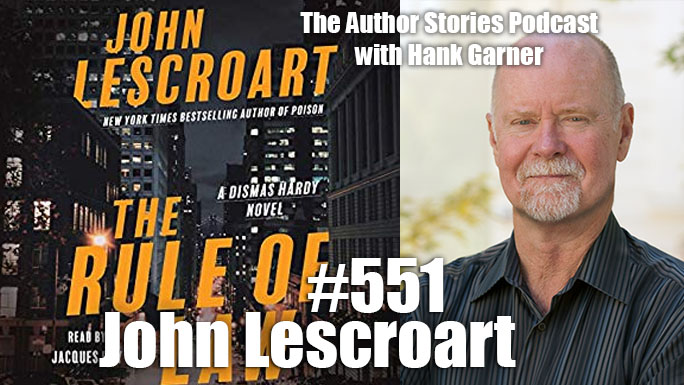 John Lescroart joins me again today to talk about his brand new book The Rule Of Law, and to drop some writerly wisdom on us from his more than two decade writing career.

John Lescroart – the “master of the legal thriller” (Chicago Sun-Times) – is back in action, marshaling his witty dialogue and airtight plotting in this electrifying thriller featuring attorney Dismas Hardy as he grapples with his longtime trusted assistant being charged as an accessory to murder.

Dismas Hardy knows something is amiss with his trusted secretary, Phyllis. Always reliable and consistent, she’s been behaving out of character and disappearing without notice. Dismas becomes even more concerned when he discovers Phyllis has been reluctantly playing host to her convict brother, a man just released from San Quentin after serving a 25-year sentence for armed robbery and attempted murder.

Things take a shocking turn with Phyllis is suddenly arrested at work, accused of being an accessory to the murder of Hector Valdez, a coyote who’d been smuggling women into the country from El Salvador and Mexico. That is, until recently, when he was shot to death – on the very same day Phyllis started disappearing from work. The connection between Phyllis, her brother, and Hector’s murder is not something Dismas can easily understand, but if his treasured colleague has any chance of going free, he needs to put all the pieces together – and fast.

As “one of the best thriller writers to come down the pike” (USA Today), John Lescroart crafts yet another whip-smart and rousing novel filled with shocking twists and turns that will keep you guessing until the very end.

John Lescroart (pronounced “less-kwah”) is a big believer in hard work and single-minded dedication, although he’ll acknowledge that a little luck never hurts. Now a New York Times bestselling author whose books have been translated into 16 languages in more than 75 countries, John wrote his first novel in college and the second one a year after he graduated from Cal Berkeley in 1970.

The only hitch was that he didn’t even try to publish either of these books until fourteen years later, when finally, at his wife Lisa’s urging, he submitted SON OF HOLMES to New York publishers—and got two offers, one in hardcover, within six weeks!

But about six years before that first hardcover publication, John’s ambition to become a working novelist began to take shape. At that time, as Johnny Capo of Johnny Capo and His Real Good Band, he’d been performing his own songs for several years at clubs and honky-tonks in the San Francisco Bay Area. On his 30th birthday, figuring that if he hadn’t made it in music by then, he never would, he retired from the music business.

He’d been writing all along, and didn’t stop now, although his emphasis changed from music first, prose second, to the other way around. Within two months of his last musical gig, he finished a novel, SUNBURN, that drew on his experiences in Spain. Since John didn’t know anyone in the publishing world, he sent the manuscript to his old high school English teacher, who was not enthusiastic. Fortunately, the teacher left the pages on his bedside table, and his wife picked them up and read them. She loved the book and submitted it in John’s name to The Joseph Henry Jackson Award, given yearly by the San Francisco Foundation for Best Novel by a California author. Much to John’s astonishment, SUNBURN beat out 280 other entrants, including INTERVIEW WITH A VAMPIRE, for the prize.

Though SUNBURN wasn’t to be published for another four years, and then only in paperback, the award changed John’s approach to writing. He started to think he might make a living as an author, something he’d never previously believed possible for a “regular guy with no connections.” He started paying for his writing habit by working a succession of “day jobs”—everything from a computer programmer with the telephone company, to Ad Director of Guitar Player Magazine, to moving man, house painter, bartender (at the real Little Shamrock bar in San Francisco), legal secretary, fundraising executive, and management consultant writing briefs on coal transportation for the Interstate Commerce Commission!!

John moved to Los Angeles and in the next three years finished three long novels, the last of them featuring a private investigator who shared the name Dismas Hardy (and very little else) with the man who would become John’s well-known attorney/hero. Since he’d gotten SUNBURN published without using a literary agent (an old friend had shown it to a secretary at Pinnacle Books in Los Angeles, who bought it), John went on submitting his work to New York over the transom, receiving many kind rejection letters, but no offers. Finally he realized that even if he wasn’t fated to become a commercially successful author, he wanted to be involved in books and literature. So he enrolled in the Masters Program in Creative Writing at the University of Massachusetts at Amherst.

It was not to be.

While John and his wife, Lisa Sawyer, were preparing that summer to move to New England, he was paying bills by typing technical papers on coal transportation for a consulting firm. Asked by the boss what he thought of the paper, John commented that the argument it made wasn’t very compelling and that it wasn’t very well-written. His boss challenged him: could he do it any better? In a week, John re-wrote the 400-page draft, which went on to win before the ICC. This led to a “day job” offer that John couldn’t refuse. Graduate school fell by the wayside.

But after a year and a half, even a lucrative day job had become a burden. Nothing would do for John by now but to write, but he had little time for writing with his high-paying, career-oriented job. Lisa suggested taking a look at some of the old manuscripts and submitting them—she remembered reading and liking SON OF HOLMES. How about that one? There was one 14-year-old yellowed and brittle copy of the manuscript left in the world—in the basement of their best man, Don Matheson’s, apartment. Six weeks later, John had his first hardcover book deal.

Over the next seven years, back in Los Angeles again, John and Lisa were finally ready to start their family. During this time, John wrote several screenplays and published three more books while he held down a job as a word processing supervisor at a downtown law firm. He rose each day at 5:30 and went to a room they’d built in their garage, where he wrote four pages of his latest in two hours. Then he worked his nine-to-five, ate a bag lunch, and stayed downtown, typing briefs and pleadings at various other law firms until 10:00 or 11:00 at night.

Finally he was publishing, but he wasn’t making a living. And then in 1989, at the age of forty-one, he took a break to go body-surfing at Seal Beach. The next day, he lay in a Pasadena hospital. From the contaminated sea water where he’d been surfing, he’d contracted spinal meningitis. Doctors gave him two hours to live.

John now looks back on his 11-day battle with death as the turning point in his career. He quit the last of his day jobs to move back to Northern California and to write full-time, with intense focus and a renewed dedication. The resulting books, richer in terms of theme and story, found a devoted readership and propelled him into the elite circle of bestselling authors—only twenty years to overnight success!