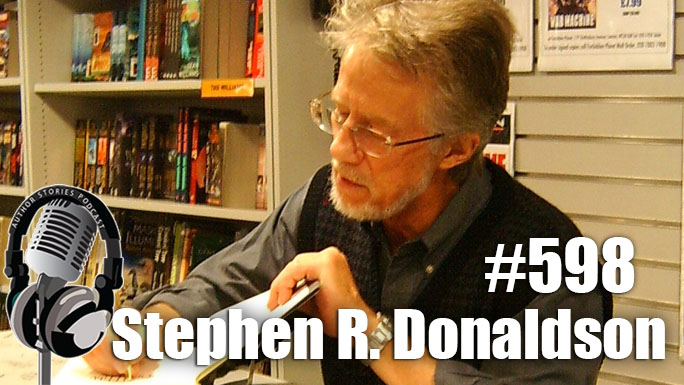 Today’s guest is Stephen R. Donaldson, author of the new fantasy book The War Within (The Great God’s War Book Two), and the author of the Thomas Covenant series.

Stephen R. Donaldson, the New York Times bestselling author of The Chronicles of Thomas Covenant, returns to the world of his Great God’s War fantasy epic as two kingdoms— united by force—prepare to be challenged by a merciless enemy…

It has been twenty years since Prince Bifalt of Belleger discovered the Last Repository and the sorcerous knowledge hidden there. At the behest of the repository’s magisters, and in return for the restoration of sorcery to both kingdoms, the realms of Belleger and Amika ceased generations of war. Their alliance was sealed with the marriage of Bifalt to Estie, the crown princess of Amika. But the peace–and their marriage–has been uneasy.

Now the terrible war that King Bifalt and Queen Estie feared is coming. An ancient enemy has discovered the location of the Last Repository, and a mighty horde of dark forces is massing to attack the library and take the magical knowledge it guards. That horde will slaughter every man, woman, and child in its path, destroying both Belleger and Amika along the way.

With their alliance undermined by lingering hostility and conspiracies threatening, it will take all of the monarchs’ strength and will to inspire their kingdoms to become one to defend their land, or all is lost….

Born in 1947 in Cleveland, Ohio, Stephen R. Donaldson lived in India (where his father was a medical missionary) until 1963. He graduated from the College of Wooster (Ohio) in 1968, served two years as a conscientious objector during the Vietnam War, doing hospital work in Akron, then attended Kent State University, where he received his M.A. in English in 1971.

After dropping out of his Ph.D. program and moving to New Jersey in order to write fiction, Donaldson made his publishing debut with the first “Covenant” trilogy in 1977. That enabled him to move to a healthier climate. He now lives in New Mexico.

The novels for which he is best known have received a number of awards. However, the achievements of which he is most proud are the ones that seemed the most unlikely. In 1994 he gained a black belt in Shotokan karate from Sensei Mike Heister and Anshin Personal Defense; and in 2009 he was awarded a Doctor of Literature (Litt.D) degree from the School of Divinity of the University of St. Andrews in Scotland.

After spending seven years on his five book Gap sequence of science fiction novels, Donaldson published a second collection of short stories and a fourth mystery novel. He then put 12 years into writing “The Last Chronicles of Thomas Covenant.”