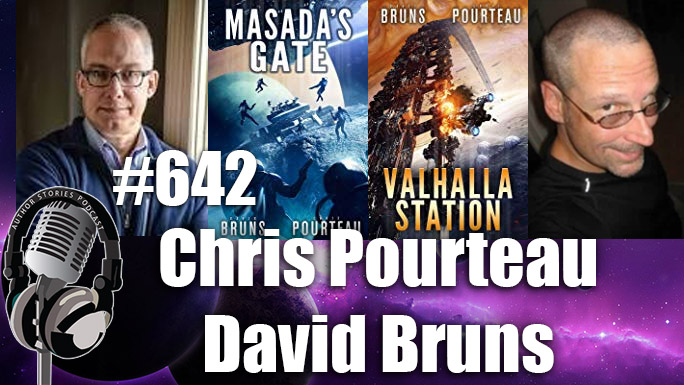 Today I am joined by Chris Pourteau and David Bruns, coauthors of the The SynCorp Saga: Empire Earth series. Chris and David are some of my oldest friends in the writer community and I absolutely love their new series The SynCorp Saga. We talk about tackling the second of three trilogies in the saga and much more. Find their last visit to the show below.

From Book 1: The Expanse meets The Godfather in this Space Opera/Sci-Fi Noir Thriller about corporate greed, rebellion, and mankind’s survival among the stars.

Thirty years after the Syndicate Corporation saved Earth from climate-change extinction, SynCorp’s Five Factions rule the solar system with an iron fist wrapped in a velvet glove. Food, entertainment, safety, security—SynCorp provides it all. In return, the Company requires complete loyalty and obedience to corporate law.

The Soldiers of the Solar Revolution claim life under SynCorp is slavery cloaked in comfort. They launch their rebellion, targeting the pillars of corporate production: sabotaging refineries on Mars, shattering Callisto’s orbital ring. Meanwhile, brutal pirates siphon off Company resources in the Belt, and hackers tap into citizens’ implants, addicting them to fantasies shaped from their own dreams.

Besieged on all sides, SynCorp’s Five Factions are in retreat. The rebels aim to destroy the Company to free mankind. But does mankind really want to be freed?

Who I am, what I do
I’m a writer of Science Fiction, Post-Apocalyptic, and Fantasy speculative fiction who loves a good character-centered story, whatever the genre. I also edit anthologies in my spare time…

Writing is a calling
I’ve written stories all my life but only began pursuing it seriously in the mid-20teens. Classic television (Twilight Zone, Star Trek) has impacted me as much favorite writers (King, Tolkien, Cornwell) in how I approach storytelling.

Other stuff
I’m a player and producer for the podcast Sci-Fi Writers Playing Old School D&D and a frequent guest on Hank Garner’s Author Stories Podcast, among other podcasts. I’m also co-founder of Sci-Fi Bridge, a free subscription site aimed at bringing the best SF writers and most enthusiastic SF readers together.

I always knew I’d be a writer—someday.

I grew up on a small farm in the mountains of northeastern Pennsylvania. We didn’t have a TV, so my reading habit gradually turned into a reading obsession. After high school, I was accepted to the United States Naval Academy where I earned a Bachelors of Science in Honors English (That’s not a typo. I’m probably the only English major you’ll ever meet who had to take multiple semesters of calculus, physics, chemistry, electrical engineering, naval architecture and weapons systems design just so I could get to read some Shakespeare. It was totally worth it.)

I spent six years as a commissioned officer in the nuclear-powered submarine force chasing Russian submarines. Then the Cold War ended and I became a civilian. For the next two decades, I schlepped my way around the globe as an itinerant executive in the high-tech sector, and even did a stint with a Silicon Valley startup.

In 2013, I took a break from corporate life and wrote a book. I enjoyed it so much that I wrote another (better) book, the first in a series. For the writer in me, my “someday” is today.

My wife and I are self-confessed travel junkies. We’re proud of the fact that both our children had to get extra pages in their passports in order to fit all their visa stamps. Together, we’ve visited over two dozen different countries and almost all fifty states, but Minnesota is home.

If you’d like to chat, you can drop me an email at david@davidbruns.com.