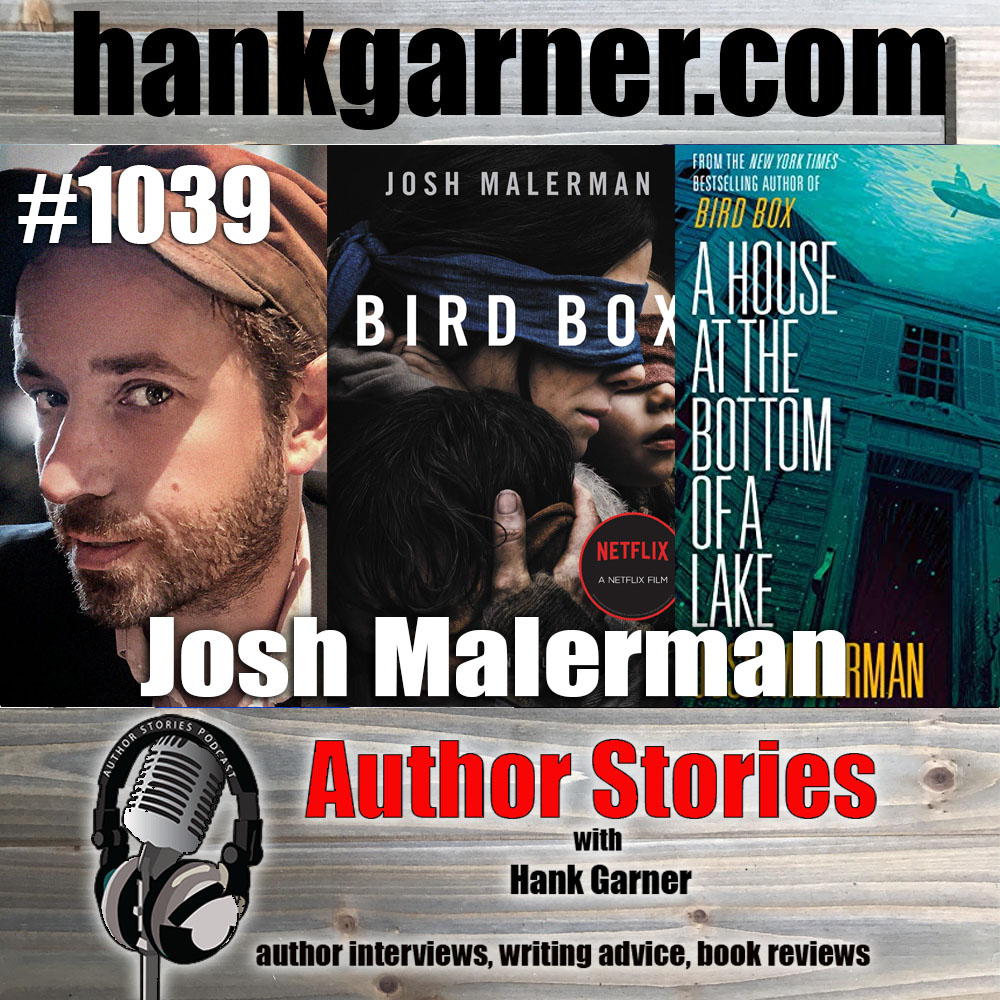 Today’s author interview guest is Josh Malerman, author of Bird Box and A House at the Bottom of a Lake.

From the New York Times bestselling author of Bird Box and Malorie comes a haunting tale of love and mystery, as the date of a lifetime becomes a maddening exploration of the depths of the heart.

“Malerman expertly conjures a fairy tale nostalgia of first love, and we follow along, all too willingly, ignoring the warning signs even as the fear takes hold.”—Lit Reactor

The story begins: young lovers, anxious to connect, agree to a first date, thinking outside of the box.

At seventeen years old, James and Amelia can feel the rest of their lives beginning. They have got this summer and this summer alone to experience the extraordinary.

But they didn’t expect to find it in a house at the bottom of a lake.

The house is cold and dark, but it’s also their own.

Caution be damned, until being carefree becomes dangerous. For the teens must decide: swim deeper into the house—all the while falling deeper in love?

Whatever they do, they will never be able to turn their backs on what they discovered together. And what they learned:

Just because a house is empty, doesn’t mean nobody’s home.

Josh Malerman is an American author of novels and short stories. Before publishing his debut novel Bird Box with ECCO/HarperCollins, he wrote fourteen novels, never having shopped one of them.

Being the singer/songwriter of the Detroit rock band The High Strung, Malerman toured the country for six years, as the band played an average of 250 shows a year, and Malerman wrote many of the rough drafts for these novels in the passenger seat between cities on tour. He says this about those days: “I never saw the books with dollar signs in my eyes. It was no hobby, that’s for sure, it was the real thing and always has been, but I was happy, then, simply writing, and while I blindly assumed they’d be published one day, I had no idea how something like that occurred.”

As the pile of rough drafts grew, so did the questions as to what he was planning on doing with them. Malerman often says that he lived long in a “glorious delusion” in which he took part in phantom interviews, pretended to have an agent, debated with fictitious editors, and placed invisible hardcover books upon his shelves.

It wasn’t until a friend from high school, Dave Simmer, contacted him that those delusions became reality. Simmer, having worked with authors and properties in Hollywood, asked Malerman’s permission to send one of his books to some people he knew in the book business. Malerman heartily agreed and the pair sent out Goblin, a collection of novellas that all take place in the titular city of Goblin. From there, a team was assembled and Malerman suddenly found himself speaking with a real agent and debating with actual editors. He says this of the part Simmer played in his career: “There were two things at play at that point in time; one, Dave was a ghostly benefactor, golden hearted and smart, descending from the sky to help me. And two, what may sound like some luck couldn’t have become fortunate if I wasn’t armed with a dozen novels to talk shop with.”

A limited edition of Goblin is set for publication on Halloween of 2017, through Earthling Publications.

Bird Box was released in 2014 and many short stories and novellas have followed.

Black Mad Wheel (ECCO/HarperCollins) is slated for May of 2017 and Malerman now has the task of juggling between the twenty-seven already written novels and whatever new ideas come going forward.

Cemetery Dance is set to publish a hardcover limited edition of On This, the Day of the Pig in late 2017.

Del Rey (Penguin/Random House) has purchased the rights to Unbury Carol, a fantastic horror-western to be published in April of 2018.