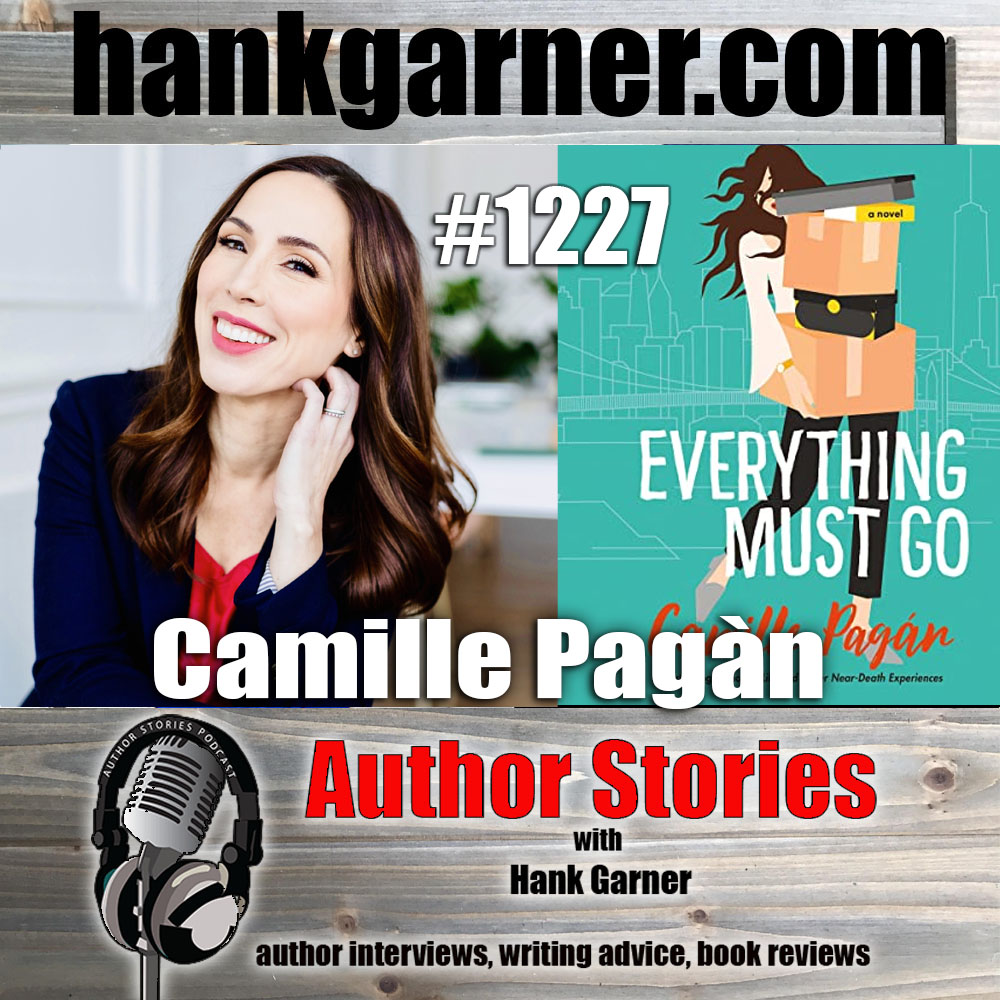 Today’s author interview guest is Camille Pagán, author of Everything Must Go.

A warm, wry novel about secrets, second chances, and the unbreakable bonds between mothers, daughters, and sisters by the #1 Amazon Charts bestselling author of Life and Other Near-Death Experiences.

Laine Francis believes there’s a place for everything—and New York, where her family lives, isn’t her place. But no sooner does the professional organizer’s marriage begin to unravel than her sisters drop another bomb on her: their mother, Sally, may have dementia, and they need Laine to come home.

Laine agrees to briefly return to Brooklyn. After all, bringing order to chaos is what she does best. To Laine’s relief, Sally seems no more absentminded than usual. So Laine vows to help her mother maintain her independence, then hightail it back to Michigan.

Except Laine’s plans go awry when she runs into her former best friend, Ben, and realizes she finally has a chance to repair their fractured relationship. Then she discovers that memory loss isn’t the only thing Sally’s been hiding, forcing Laine to decide whether to reveal a devastating truth to her sisters—and whether to follow her heart when it means breaking her mother’s.

I’ve been telling stories as long as I’ve been able to hold a pen, but I didn’t write a novel until about ten years ago. A dear friend was battling terminal cancer and I’d just had my first child; I guess you could say life’s big questions were on my mind. I began writing at night after my daughter went to bed, and after many tough but exhilarating months, completed the draft that would become my debut, The Art of Forgetting. The experience changed me—even before I typed “The End,” I knew I wanted to do it again (and again and again).

Still, it took me several years to write another novel that made it to print. A cross-country move, the birth of my son, and a heavy dose of second book self-doubt had me ready to throw in the towel. Then I sat down and began working on a story just for myself, which put the joy back in my writing. Less than a year after handing that book, Life and Other Near-Death Experiences, to my agent, it became the #1 all-category Kindle bestseller and remained there for more than three of the first four weeks after its publication. Life was optioned for film by Jessica Chastain’s Freckle Films.

My next novel, Forever is the Worst Long Time, was an RT Reviews Top Pick and an Amazon, InStyle, and Real Simple best book of the month. Booklist called my fourth book, Woman Last Seen in Her Thirties, “fun and engaging,” while Bookreporter said it was “filled with life’s wisdoms.” In 2019, my fifth novel,  I’m Fine and Neither Are You, was an Amazon Charts and Washington Post bestseller. Library Journal describes my latest novel, This Won’t End Well, as “witty and delightful” in a starred review. My seventh novel, Don’t Make Me Turn This Life Around—the follow-up to Life and Other Near-Death Experiences—is out now, and I just wrapped up Everything Must Go, which will be out spring 2022.

It took a few books for me to realize my fiction focuses on love, loss, and making the most of this wonderfully messy life. I write to figure out how I feel about the world—and to connect with others thinking about the same things. Nothing makes me happier than hearing from a reader who says, “Your novel helped me through a tough time,” or “That’s exactly how I felt.”

I tell true stories, too; I’m also a journalist specializing in health. (You might have seen my articles in The New York Times, O: The Oprah Magazine, Parade, Time, or WebMD.) I’ve been on staff at several publications and websites, and most recently served as the health editor at Real Simple magazine.

When I’m not at my computer, you’ll find me with my nose in a book, running after my two kids and our nutty dog, or planning my next trip (most likely to Puerto Rico, where my husband was born and raised). After nearly a decade in Brooklyn and a stint in Chicago, my family and I live in Ann Arbor, Michigan.