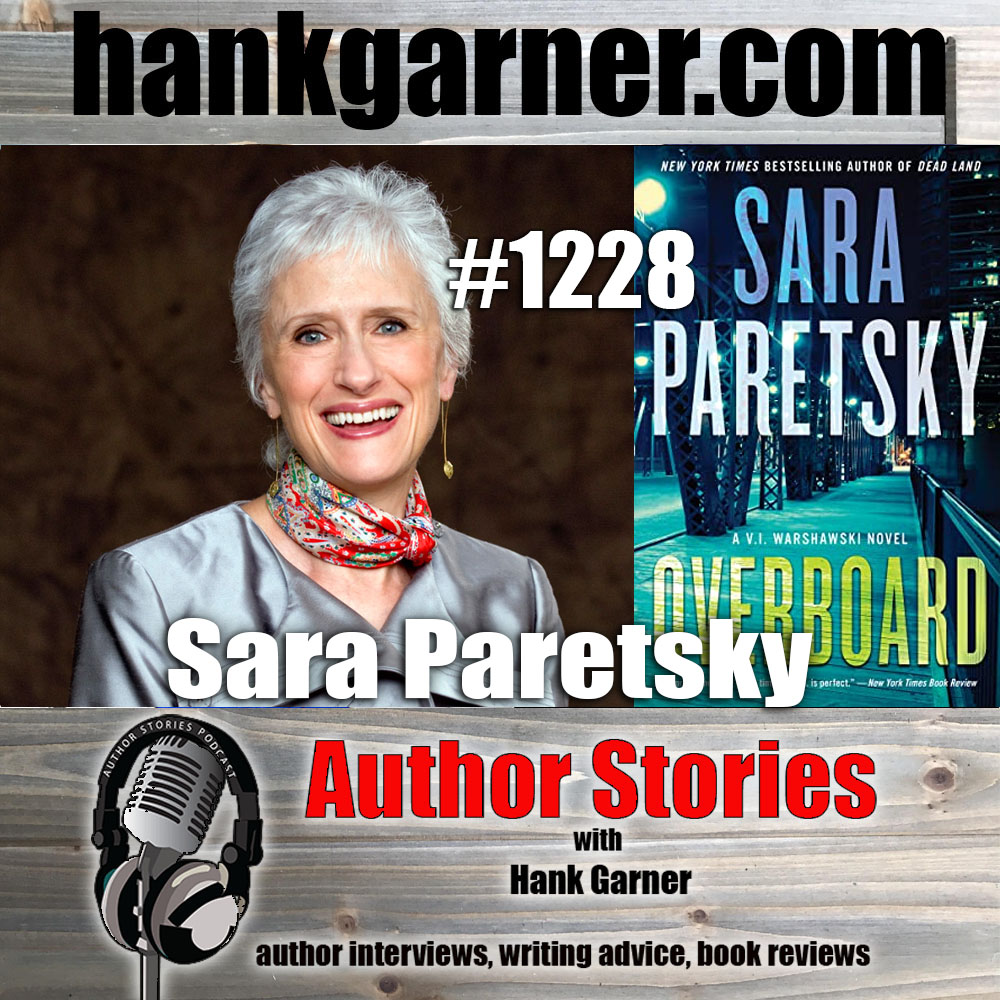 On her way home from an all-night surveillance job, V.I. Warshawski is led by her dogs on a mad chase that ends when they discover a badly injured teen hiding in the rocks along Lake Michigan. The girl only regains consciousness long enough to utter one enigmatic word. V.I. helps bring her to a hospital, but not long after, she vanishes before anyone can discover her identity. As V.I. attempts to find her, the detective uncovers an ugly consortium of Chicago powerbrokers and mobsters who are prepared to kill the girl. And now V.I.’s own life is in jeopardy as well.

Told against the backdrop of a city emerging from its pandemic lockdown, Overboard lays bare the dark secrets and corruption buried in Chicago’s neighborhoods in masterly fashion.

Before there was Lisbeth Salander or Stephanie Plum, there was V I Warshawski. Sara Paretsky revolutionized the mystery world in 1982 when she introduced V I in Indemnity Only. By creating a believable investigator with the grit and the smarts to tackle problems on the mean streets, Paretsky challenged a genre in which women typically were either vamps or victims. Hailed by critics and readers, Indemnity Only was followed by nineteen more best-selling Warshawski novels. The New York Times writes that Paretsky “always makes the top of the list when people talk about female operatives,” while Publishers Weekly says, “Among today’s PIs, nobody comes close to Warshawski.”

Called “passionate” and “electrifying,” V.I. reflects her creator’s own passion for social justice. As a contributor to the New York Times and the Guardian newspapers, and a speaker at such venues as the Library of Congress and Oxford University, Paretsky is an impassioned advocate for those on society’s margins. After chairing the school’s first Commission on the Status of Women as a Kansas undergraduate, Paretsky worked as a community organizer on Chicago’s South Side during the turbulent race riots of 1966. More recently, Paretsky served with then-state senator Obama on the board of Thresholds, which serves Chicago’s mentally ill homeless. She has mentored teens in Chicago’s most troubled schools, and works closely with literacy and reproductive rights groups.

Not only has Paretsky’s own work broken barriers, she has also helped open doors for other women. In 1986 she created Sisters in Crime, a worldwide organization to support women crime writers, which earned her Ms. Magazine’s 1987 Woman of the Year award. More accolades followed: the British Crime Writers awarded her the Cartier Diamond Dagger for lifetime achievement; Blacklist won the Gold Dagger from the British Crime Writers for best novel of 2004, and she has received the honorary degree of Doctor of Letters from several different universities. The actress Kathleen Turner played V.I. Warshawski in the movie of that name and Paretsky’s work is celebrated in Pamela Beere Briggs’s documentary, Women of Mystery. Today Sara Paretsky’s books are published in 30 countries.

She detailed her journey from Kansas farm-girl to New York Times bestseller in her 2007 memoir, Writing in an Age of Silence, which was a National Book Critics Circle Award finalist. In addition, Paretsky has written two highly-acclaimed stand-alone novels, Ghost Country, used in many seminary classrooms, and Bleeding Kansas, set in the part of rural Kansas where Paretsky grew up. She has published two collections of her own short stories, most recently Love & Other Crimes, and edited four other anthologies.

Like her fictional detective, Paretsky lives and dies with the Cubs, runs Chicago’s lakefront with her golden retriever, and loves to sing, taking part in community musicals. Paretsky lives on Chicago’s south side with her husband, a member of the University of Chicago’s Fermi Institute.