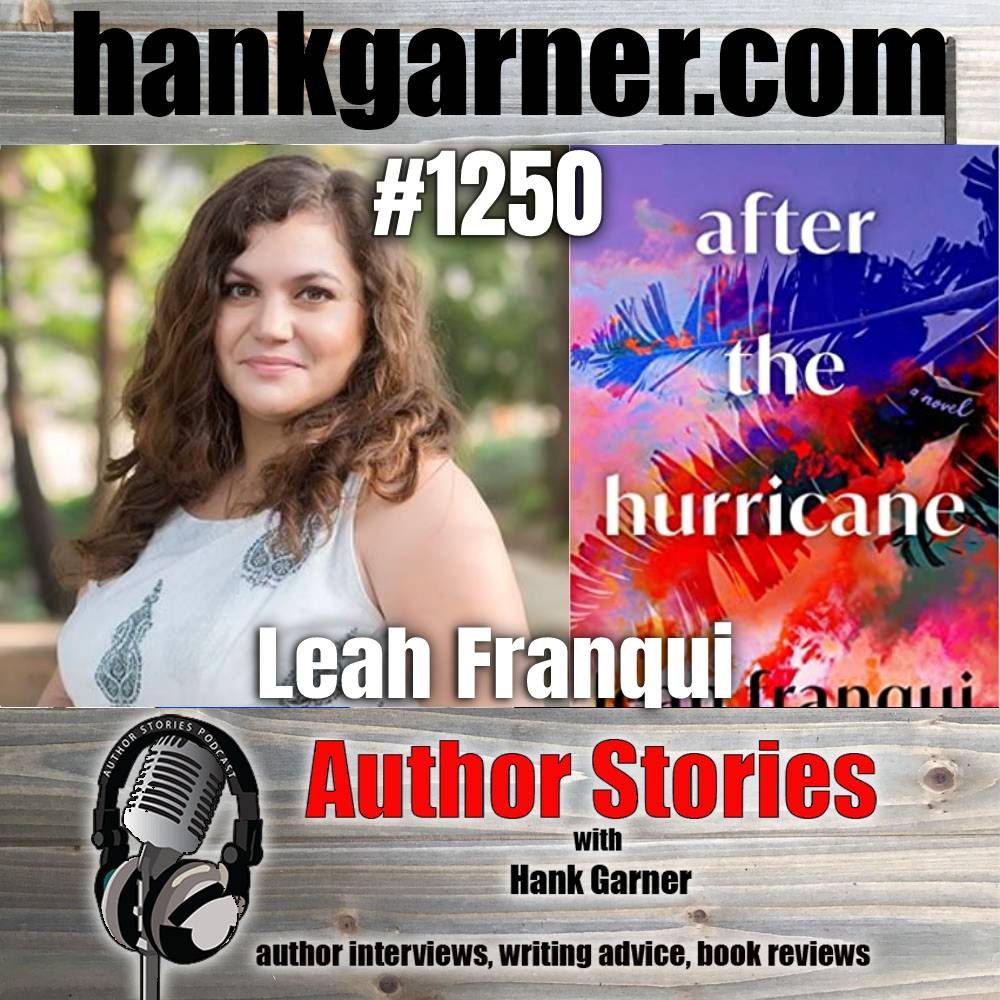 Today’s author interview guest is Leah Franqui, author of After the Hurricane.

Reminiscent of Gabriela Garcia’s Of Women and Salt, Leah Franqui brings us an engrossing, deeply personal novel with a mystery at its heart as a daughter returns to Puerto Rico to search for her troubled father, who has gone missing after Hurricane Maria.

From the outside, Elena Vega’s life appears to be an easy one: the only child of two professional parents, private school, NYU. But her twenties are aimless and lacking in connection. Something has always been amiss in her life: her father, the brilliant but deeply troubled Santiago Vega.

Born in rural Puerto Rico, Santiago arrived in New York as a small child. His harsh, mercurial father returned to the island, leaving Santiago to be raised by his mentally ill mother and his formidable grandmother. An outstanding student, he followed scholarships to Stanford, then Yale Law, marrying Elena’s mother along the way. Santiago is the shining star of his migrant family—the one who made it out and struck it rich. But he is a haunted man, plagued by trauma, bipolar disorder, and alcoholism. He’s lost contact with Elena over the years and returned to San Juan to wrestle his demons alone.

Then Hurricane Maria strikes, and Santiago vanishes. Desperate to know what happened to the father she once adored, Elena returns to Puerto Rico, a place she loved as a child but hasn’t seen in years. There she must unravel the truth about who her father is, crisscrossing the storm-swept island and reaching deep into his family tree to find relatives she’s never met, each of whom seems to possess a clue about Santiago’s fate.

A compelling mystery unfolds, as Elena is reunited with family, and with a place she loved and lost—the island of Puerto Rico, which is itself a character in this book. It’s a story of connection, migration, striving, love, and loss, illuminated by humor and affection, written by a novelist at the height of her gifts.

Leah Franqui is a proud Philadelphian, and believes the city is far more than just cheese steaks.

Leah graduated from Yale University in 2009 with an intellectually useful and financially useless degree in Theater Studies. She traveled for a year trying to find herself, working on a farm in southern Spain, going on a Rubens fangirl trip to Belgium, and entertaining fellow train passengers in China. Returning to Philadelphia, she started working in non-profit theater to support her work as a playwright. In 2012 she left Philadelphia again, this time for Brooklyn, to attend graduate school at NYU-Tisch, where she received her masters in Dramatic Writing in 2014. In 2015 Leah moved to Mumbai,  where she spent six years.

​Leah has written seven full-length plays, one of which was performed in August of 2015 in New York and another of which received the 2013 Goldberg Play-writing award. Her work also includes four  full-length screenplays, one of which was awarded the 2013 Alfred Sloan Foundation Screenwriting award, and a web series, viewable at https://www.tobyforproductions.com/after-ever-after and myriad articles for blogs and online publications.

Leah has worked as a line chef, a real estate agent, a sewing teacher, a tutor, an assistant, a marketing director, a grant writer, an editor, and recently, a dubbing artist, voicing the main character in a Croatian soap opera for the African market.

Now, Leah spends most of her time writing, in between traveling, cooking, reading, sewing her own clothing, and watching copious amounts of television. She is currently pursuing a PhD at Georgia State University in between working on novels. Her cat is absolutely no help in this whatsoever.