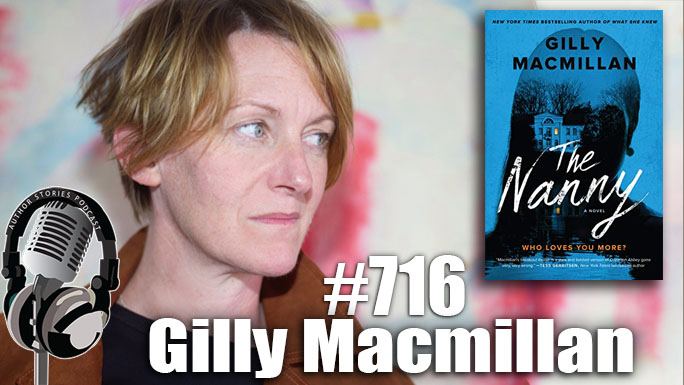 Today on Author Stories my guest is Gilly Macmillan, author of the new thriller The Nanny. In this latest book, Gilly takes a familiar trope on the psychological thriller genre and turns it on its head. The Nanny is like no other book you’ve read. Listen to Gilly’s first visit to the show here.

The New York Times bestselling author of What She Knew conjures a dark and unpredictable tale of family secrets that explores the lengths people will go to hurt one another.

When her beloved nanny, Hannah, left without a trace in the summer of 1988, seven-year-old Jocelyn Holt was devastated. Haunted by the loss, Jo grew up bitter and distant, and eventually left her parents and Lake Hall, their faded aristocratic home, behind.

Thirty years later, Jo returns to the house and is forced to confront her troubled relationship with her mother. But when human remains are accidentally uncovered in a lake on the estate, Jo begins to question everything she thought she knew.

Then an unexpected visitor knocks on the door and Jo’s world is destroyed again. Desperate to piece together the gaping holes in her memory, Jo must uncover who her nanny really was, why she left, and if she can trust her own mother…

In this compulsively readable tale of secrets, lies, and deception, Gilly Macmillan explores the darkest impulses and desires of the human heart. Diabolically clever, The Nanny reminds us that sometimes the truth hurts so much you’d rather hear the lie.

Gilly Macmillan is the internationally bestselling author of five novels including WHAT SHE KNEW, THE PERFECT GIRL, ODD CHILD OUT, I KNOW YOU KNOW and THE NANNY.

A former art historian and photographer, Gilly studied at Bristol University and the Courtauld Institute of Art in London. She lives in Bristol, UK, with her husband and three children.

Her first novel, WHAT SHE KNEW, was a Target pick, a LibraryReads pick, an Indie Next pick, an Edgar award nominee, and an International Thriller Writers award finalist.

Gilly’s novels have appeared on the New York Times, Globe & Mail and Der Spiegel bestseller lists, been translated into over 20 languages and sold over one million copies worldwide. She’s been described as ‘one heck of a good writer’ (Wall Street Journal) and her novels have been praised as ‘nuanced, completely addictive’ (People), ‘riveting’ (Publishers Weekly), and ‘visceral, emotionally charged…heart-wrenchingly well told’ (The Daily Mail).

She is currently working on her sixth novel.