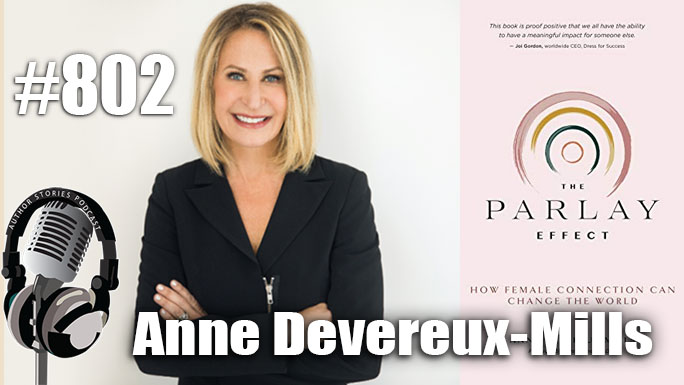 Today’s author interview guest is Anne Devereux-Mills, author of The Parlay Effect: How Female Connection Can Change The World.

In The Parlay Effect: How Female Connection Can Change the World, Anne Devereux-Mills uses her insights as Founder of Parlay House to show how small actions can create a cascade of positive change — in your life and in the lives of others.

A former advertising agency CEO, Devereux-Mills tells the inspiring story of how, just short of her 50th birthday, she lost her health to cancer, her last child to college, and her job to the recession.
Stripped of everything that had been her identity, she set out on a path to rediscover herself and recreate her life. Recognizing that she was missing authentic relationships that were not based on what she “did” for a living, but what she cared about as a person, in 2012 she founded Parlay House, a now-international series of salons that brings together diverse groups of women to talk about topics they rarely discuss. As the gatherings grew, she saw how they triggered small actions among participants and resulted in waves of connection and support well beyond the live gatherings. She dubbed that cascade “The Parlay Effect.”

˃˃˃ Through a combination of personal stories and scientific research — conducted in collaboration with Dr. Serena Chen, a tenured Professor of Social Psychology at the University of California, Berkeley — The Parlay Effect will help you reframe your relationships, and in turn:
– Feel stronger in your ability to help others

ANNE DEVEREUX-MILLS is the accomplished CEO, entrepreneur and documentary film executive behind Parlay House, a salon-style series of gatherings she founded in 2012. Parlay House is committed to sparking authentic conversations and building meaningful, supportive relationships across a diverse range of women. It currently has over 5,000 participants and operates in seven cities across the U.S. and Europe.

Devereux-Mills is also a dedicated mentor for SHE-CAN, an organization supporting and grooming the next generation of female world leaders coming from post-genocide countries. She was a key member of the team that helped pass California’s Proposition 36, which brought fair sentencing to thousands of non-violent inmates as part of California’s Three Strikes reform. Following that victory, she was the Executive Director for the Emmy-nominated documentary film entitled, The Return and is currently Executive Directing two additional films, Mississippi Red and The Green Dress. Devereux-Mills supported Stanford University by serving as the Executive Director of Healthy Body Image Programs. Her philanthropic work has been recognized by a range of organizations including SHE-CAN, Advertising Women of New York, The All-Stars Foundation, Project Kesher and Worldwide Women.

Prior to her philanthropic ventures, Anne served in leadership roles at BBDO, LLNS and TBWA/WorldHealth, Consumer Healthworks, a division of Merkley and Partners, as well as Harrison & Star. Anne also helped launch the iHUG Foundation, a not-for-profit school in Uganda supporting some of that nation’s most needy children.