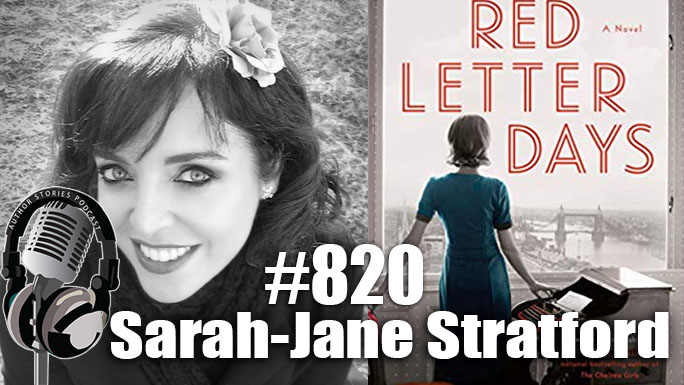 When two brave women flee from the Communist Red Scare, they soon discover that no future is free from the past.

Amid the glitz and glamour of 1950s New York, Phoebe Adler pursues her dream of screenwriting. A dream that turns into a living nightmare when she is blacklisted—caught in the Red Menace that is shattering the lives of suspected Communists. Desperate to work, she escapes to London, determined to keep her dream alive and clear her good name.

There, Phoebe befriends fellow American exile Hannah Wolfson, who has defied the odds to build a career as a successful television producer in England. Hannah is a woman who has it all, and is now gambling everything in a very dangerous game—the game of hiring blacklisted writers.

Neither woman suspects that danger still looms . . . and their fight is only just beginning.

Sarah-Jane Stratford grew up in Los Angeles with a deep love of theatre and literature. After earning a bachelor’s degree in history at UC Santa Cruz, she then obtained a master’s degree in medieval history at the University of York in Britain, where she wrote a thesis about women in the manorial court system which gave her a new appreciation for the modern era.

Sarah-Jane has written articles and essays for a range of publications, including The Guardian, The Boston Globe, The Los Angeles Review of Books, Marie-Claire, Bitch, Slate, Salon, Guernica, Bustle, and BOMB.

In 2017, Sarah-Jane was awarded a Tier One Highly Talented visa by the Arts Council in Britain, granting her leave to live and write in the UK for five years. She now lives in London, where she attends a lot of theatre, knits, and explores.
You can follow her on Twitter, view her photographs on Instagram, and contact her here.