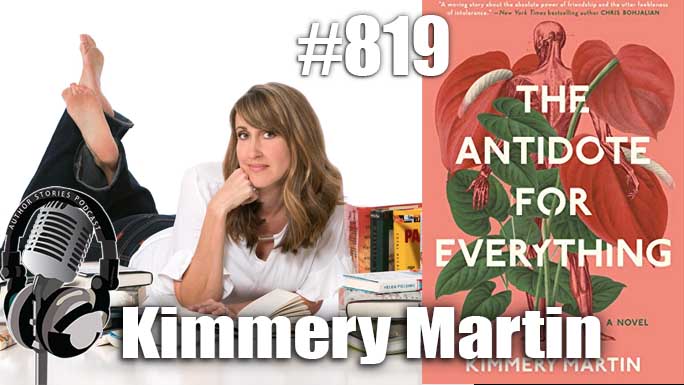 Today’s author interview guest is Kimmery Martin, author of The Antidote for Everything.

In this whip-smart and timely novel from acclaimed author Kimmery Martin, two doctors travel a surprising path when they must choose between treating their patients and keeping their jobs.

Georgia Brown’s profession as a urologist requires her to interact with plenty of naked men, but her romantic prospects have fizzled. The most important person in her life is her friend Jonah Tsukada, a funny, empathetic family medicine doctor who works at the same hospital in Charleston, South Carolina and who has become as close as family to her.

Just after Georgia leaves the country for a medical conference, Jonah shares startling news. The hospital is instructing doctors to stop providing medical care for transgender patients. Jonah, a gay man, is the first to be fired when he refuses to abandon his patients. Stunned by the predicament of her closest friend, Georgia’s natural instinct is to fight alongside him. But when her attempts to address the situation result in incalculable harm, both Georgia and Jonah find themselves facing the loss of much more than their careers.

Kimmery Martin won her first short story contest in the first grade, and was awarded a red stuffed elephant and publication in the school newspaper. Her writing career then suffered an unfortunate dry spell, finally broken with the publication of the enthralling journal article Lymphatic Mapping and Sentinel Lymph Node Biopsy in the Staging of Melanoma, followed by the equally riveting sequel Sentinel Lymph Node Biopsy for Pelvic Malignancies, both during medical school.

Conscious readers remained elusive, however, prompting her to wait another decade or so before trying again. This time, spurred on by a dubious but supportive husband and three constantly interfering children, she produced an entire novel. The Queen of Hearts, exploring the startling secrets in a friendship between a cardiologist and a trauma surgeon, became an instantly beloved classic amongst three of her friends. It was published by Penguin Random House in 2018 to considerable acclaim. Her next novel, The Antidote For Everything, will be published in February 2020.

When not writing, Kimmery spends her time mothering her slew of perfect children. She’s also occupied with poorly executed household chores, working as a physician, and serving on various non-profit boards in Charlotte, North Carolina. She exercises grudgingly, cooks inventively, reads voraciously, offers helpful book recommendations, interviews authors, publishes travel articles, and edits her son’s middle grade book reviews. Finally, she is a world-class Boggle champion, which most people find to be sexy beyond all description.