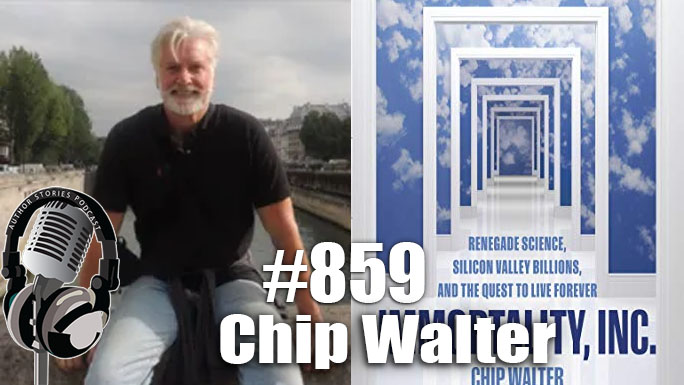 This gripping narrative explores today’s scientific pursuit of immortality, with exclusive visits inside Silicon Valley labs and interviews with the visionaries who believe we will soon crack into the aging process and cure death.

We live in an age when billionaires are betting their fortunes on laboratory advances to prove aging unnecessary and death a disease that can be cured. Researchers are delving into the mysteries of stem cells and the human genome, discovering what it means to grow old and how to keep those processes from happening. This isn’t science fiction; it’s real, it’s serious, and it’s on track to revolutionize our definitions of life and mortality.

In Immortality, Inc., veteran science journalist Chip Walter gains exclusive access to the champions of this radical cause, delivering a book that brings together for the first time the visions of molecular biologist and Apple chairman Arthur Levinson, genomics entrepreneur Craig Venter, futurist Ray Kurzweil, rejuvenation trailblazer Aubrey de Grey, and stem cell expert Robert Hariri. Along the way, Walter weaves in fascinating conversations about life, death, aging, and the future of the human race.

Chip Walter is an author, journalist, National Geographic Explorer, filmmaker and former CNN bureau chief. He has an unusually broad background that spans both science and entertainment. Chip’s fifth book, Immortality, Inc. — Renegade Science, Silicon Valley Billions and the Quest to Live Forever for National Geographic Books will be available in bookstores everywhere January 7, 2020. His previous four books include–Last Ape Standing: The Seven-Million-Year Story of How and Why We Survived; Thumbs, Toes and Tears – And Other Traits That Make Us Human (Walker –– Bloomsbury Publishing); I’m Working on That with William Shatner (Simon and Schuster); and Space Age for Random House, the companion volume to the primetime PBS series Chip developed.

Each book reaches out to mainstream audiences to explore scientific topics that relate to the human condition, evolution, emotion, behavior and creativity. The New York Times Book Review, called Last Ape “a lively journey… that takes an antic delight in the triumphal adaptations and terrifying near misses of human evolution.” The New Yorker called it “engaging” and “fascinating.” Futurist Ray Kurzweil said, “Read it! You’ll never see yourself or anyone else the same way.” And Booklist called it, “captivating, informative, exceptionally well-written and accessible.” Thumbs, Toes and Tears also received rave reviews: Publisher’s Weekly hailed it as “fascinating and superbly written,” while Kirkus Reviews said, “Walter narrates with flair and enthusiasm.”

Chip’s articles have appeared in National Geographic, The Economist, Slate, the Wall Street Journal and Scientific American, among many other publications, and have covered subjects as diverse as the origins of kissing, laughter, human consciousness and art. He has been lucky enough to travel to six continents as a journalist and documentary filmmaker, from the Amazon Rain Forest and outback of Australia to the Serengeti and remote islands of the Pacific. His cover story The First Artists was National Geographic’s featured story in January 2015. His books have so far been translated into eight languages reaching readers from Kyoto to Rio de Janeiro, Madrid, Hong Kong and Seoul.

Chip has also spoken at Harvard Law School, Carnegie Mellon University, Columbia University’s School of Journalism, Xerox PARC and the Chautauqua Institution on a wide range of topics and has twice moderated scientific panels at the United Nations on child brain development at the request of UNICEF Director Anthony Lake. He has often been a guest on radio stations and websites around the world including National Public Radio’s All Things Considered, Michio Kaku’s Science Fantastic, Irish National Radio and The Wall Street Journal.

Chip is particularly fascinated with two seemingly unrelated subjects – human behavior, and the increasingly rapid advance of technology and its effect upon our lives and society. No technology, he believes, no matter how powerful, can succeed unless it connects positively and effectively on a human level. To smooth the immense and disruptive transitions that lie ahead, he feels it is crucial for us to not only understand the power of emerging technology, but also to better comprehend the core attributes that make humans human, and humane.

“It’s crucial to explore both sides of the equation,” he says. “We can’t hope to build a promising future if we don’t develop a better understanding of ourselves and the ways we are changing the world. The two are inseparable, though we don’t usually see it that way.”

Chip’s work as a filmmaker has included writing and directing several award-winning science documentaries for PBS, each produced in association with the National Academy of Sciences. He co-wrote and produced two episodes of the Emmy award winning PBS series Planet Earth, and Variety called his documentary on the evolution of human intelligence, Fires of the Mind, “Handsomely produced, beautifully written…a fascinating hour.” The Village Voice wrote that it delivered “a sense of human accomplishment, which is the true ambition of science on the air.”

Chip has also spent part of his career as a Hollywood screenwriter, and has sold screenplays to Columbia-Tri Star, Universal and Warner Bros. His neo-noir script for Sunset Grill became a major motion picture starring Peter Weller, Stacy Keach and Lori Singer in 1993.

Previously in his career, Chip has served as National Programming Executive at WQED-TV, CEO of Digital Alchemy Inc., Vice-President and Executive Producer of ENGAGE Games Online, Senior Strategic Communications Manager at the University of Pittsburgh Medical Center (UPMC) and Author in Residence at The Institute for Green Science at Carnegie Mellon University’s Mellon Institute. He is a member of the adjunct faculty at Carnegie Mellon University’s Entertainment Technology Center, is a National Geographic Explorer and has been a faculty member at CMU at three separate schools: the Mellon Institute, the School of Computer Science and the College of Humanities and Social Sciences. He currently lives in Pittsburgh with his wife Cyndy where they both try to keep track of their four children – Molly, Steven, Hannah and Annie. (They are thinking of building a Harry Potter-Weasley Clock to help keep track of them.)