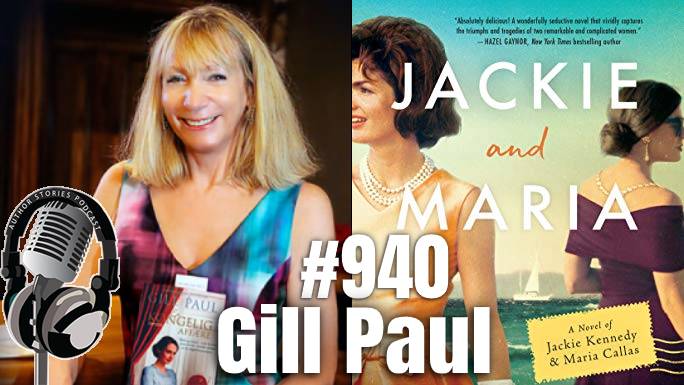 Today I am joined by Gill Paul again to talk about her new historical fiction novel Jackie and Maria: A Novel of Jackie Kennedy & Maria Callas.

From the #1 bestselling author of The Secret Wife comes a story of love, passion, and tragedy as the lives of Jackie Kennedy and Maria Callas are intertwined—and they become the ultimate rivals, in love with the same man.

The President’s Wife; a Glamorous Superstar; the rivalry that shook the world…

Jackie Kennedy was beautiful, sophisticated, and contemplating leaving her ambitious young senator husband. Life in the public eye with an overly ambitious–and unfaithful—man who could hardly be coaxed to return from a vacation after the birth of a stillborn child was breaking her spirit. So when she’s offered a holiday on the luxurious yacht owned by billionaire Ari Onassis, she says yes…to a meeting that will ultimately change her life.

Maria Callas is at the height of her operatic career and widely considered to be the finest soprano in the world. And then she’s introduced to Aristotle Onassis, the world’s richest man and her fellow Greek. Stuck in a childless, sexless marriage, and with pressures on all sides from opera house managers and a hostile press, she finds her life being turned upside down by this hyper-intelligent and impeccably charming man…

Little by little, Maria’s and Jackie’s lives begin to overlap, and they come closer and closer until everything they know about the world changes on a dime.

Gill Paul’s historical novels have reached the top of the USA Today, Toronto Globe & Mail and UK kindle charts, and been translated into twenty languages. She specializes in relatively recent history, mostly 20th century, and enjoys re-evaluating real historical characters and trying to get inside their heads.

Gill also writes historical non-fiction, including A History of Medicine in 50 Objects and series of Love Stories. Published around the world, this series includes Royal Love Stories, World War I Love Stories and Titanic Love Stories.

Gill was born in Scotland and grew up there, apart from an eventful year at school in the US when she was ten. She studied Medicine at Glasgow University, then English Literature and History (she was a student for a long time), before moving to London to work in publishing. Her first novel was written at weekends, but she has now given up the ‘day job’ to write fiction full-time. She also writes short stories for magazines and speaks at libraries and literary festivals about subjects ranging from the British royal family to the Romanovs, and about writing itself.

Gill swims year-round in an open-air pond – “It’s good for you so long as it doesn’t kill you”– and loves travelling whenever and wherever she can.