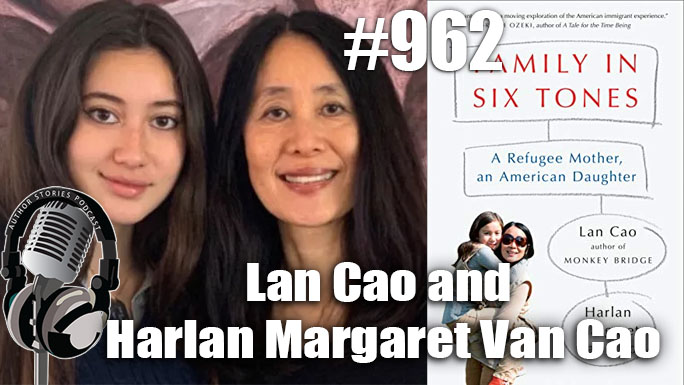 “A brilliant duet and a moving exploration of the American immigrant experience.”–Ruth Ozeki, author of A Tale for the Time Being

In 1975, thirteen-year-old Lan Cao boarded an airplane in Saigon and got off in a world where she faced hosts she had not met before, a language she didn’t speak, and food she didn’t recognize, with the faint hope that she would be able to go home soon. Lan fought her way through confusion, and racism, to become a successful lawyer and novelist. Four decades later, she faced the biggest challenge in her life: raising her daughter Harlan–half Vietnamese by birth and 100 percent American teenager by inclination. In their lyrical joint memoir, told in alternating voices, mother and daughter cross ages and ethnicities to tackle the hardest questions about assimilation, aspiration, and family.

Lan wrestles with her identities as not merely an immigrant but a refugee from an unpopular war. She has bigoted teachers who undermine her in the classroom and tormenting inner demons, but she does achieve–either despite or because of the work ethic and tight support of a traditional Vietnamese family struggling to get by in a small American town. Lan has ambitions, for herself, and for her daughter, but even as an adult feels tentative about her place in her adoptive country, and ventures through motherhood as if it is a foreign landscape.

Reflecting and refracting her mother’s narrative, Harlan fiercely describes the rites of passage of childhood and adolescence, filtered through the aftereffects of her family’s history of war, tragedy, and migration. Harlan’s struggle to make friends in high school challenges her mother to step back and let her daughter find her own way.

Family in Six Tones speaks both to the unique struggles of refugees and to the universal tug-of-war between mothers and daughters. The journey of an immigrant–away from war and loss toward peace and a new life–and the journey of a mother raising a child to be secure and happy are both steep paths filled with detours and stumbling blocks. Through explosive fights and painful setbacks, mother and daughter search for a way to accept the past and face the future together.

Lan Cao was born in Saigon, Vietnam in 1961, the same year that President Ngo Dinh Diem was elected President of the Republic of Vietnam. The years that followed were turbulent, marred by internal struggles among armed and warring religious sects as the country tried to consolidate power in a central government. North and South Vietnam were also at war, a prolonged and bloody struggle that devastated all Vietnamese in both parts of Vietnam.

Amidst this violence, Lan found solace in books. Her love of reading and writing began early in her childhood when her parents gave her a copy of 1001 Arabian Nights. She was fascinated by the story about a woman who saved her life and her sister’s life by telling stories, their fate hanging on the fabulous words that make up each story’s thread. She also loved the epic adventures of Chinese swordsmen and women written by the master Chinese novelist Jin Yong whose protagonists lived by a strict code of conduct – humility and patience, love and loyalty, paying one’s debt and keeping one’s promises, all the while performing stupendous, gravity-defying martial arts feats.

In 1975, when South Vietnam was conquered by North Vietnam’s Communist forces, Lan was adopted by an American officer who was a close family friend and sent off to live with his family in Avon, Connecticut. When her parents arrived in the United States several months later, she moved to Virginia to live with them. In the fall of 1975, she started American high school as a freshman. There was no war in Virginia, but there was loss of country, loneliness and sometimes outright hostility as a great deluge of Vietnamese refugees entered the state. Again, Lan found comfort in reading. Her parents dropped her off on Saturdays and Sundays at the public library where she serendipitously discovered and fell in love with poetry, particularly the poetry of T.S. Eliot and Elizabeth Bishop. Her love of novels began when her 11th grade AP English teacher Helen McBride introduced the class to James Joyce’s The Portrait of the Artist as a Young Man.

She was inspired to write when she entered Mount Holyoke College and read Toni Morrison’s The Bluest Eye in an independent study about identity, culture, and trauma with her professor Penny Gill. Penny encouraged her to keep a writing journal. Lan continued to write and was moved to write stories that are mined from “diving into the wreck,” as Adrienne Rich put in – the wreck of war, loss, disjunction.

Once she began writing, she could not stop. She wrote long-hand on yellow writing pads while riding the New York City subway on her way to work as an attorney. Her first novel, Monkey Bridge, came out of her desire for and need to come to terms with the journey of war, immigration and exile. Her new novel, The Lotus and the Storm, is about war, loss of country, and the complications of family and love.

Harlan Margaret Van Cao is finishing up her senior year in high school. She was born in Williamsburg, Virginia and moved to Southern California when she was ten. She loves painting and music, especially playing the piano and singing. One of her best friends is her German Shepherd puppy, Hadrian. She wants to be a producer, director, and screenplay writer. She will be attending UCLA in the fall of 2020 and plans to study economics and philosophy, while also continuing to write. While working on this book, she made some of the most important friendships, suffered through the loss of her father’s death, and learned the most she could ever have about life- things that will inspire her for future projects.

Lan says that the agonizing labor of delivering Harlan was a foreshadowing of their intense but loving mother-daughter relationship. She was born a C-section baby with a full head of hair and was chubby and overweight by anybody’s standards but was also very happy to be alive and attached to her father.It was all of the matching stylish outfits her parents put her in that would later lead to a love of fashion in her teenage years.

She attended the Montessori school until the third grade and then switched to a public school until her move to California. Her mother reminds her all the time that everything one needs to know they learn in kindergarten, but it could be argued that she learned everything she needed to know when she moved to that public school.

Harlan went through a phase between ages ten and thirteen where she only wore either very bright clashing colors or all black. She began to sing more than ever and play the piano, both of which guided her through a turbulent high school experience, along with her travels to over fifty countries and lots of adventures with her puppies and best friends.

At fifteen years old, with the aid of her mother, she signed a contract with Penguin Random House to write her memoir, which would focus on what was important to her family: topics such as coming-of-age as a teenage girl, immigration, trauma, parenting, etc. This felt odd to her, as she had always associated memoirs with retrospect and with full-life experience: two things she was lacking. With the coaching of her mother and her agent and editors, she wrote her chapters through junior and senior year of high school, finishing officially just before the wave of COVID-19.

She will attend UCLA beginning the fall of 2020 and has plans to pursue a career in film and business, one day perhaps becoming a studio head and making movies about things that matter to her. She would like to live in a pretty glass house in a big city one day with a view of the forests, rivers, the ocean, and all of the skyscrapers.