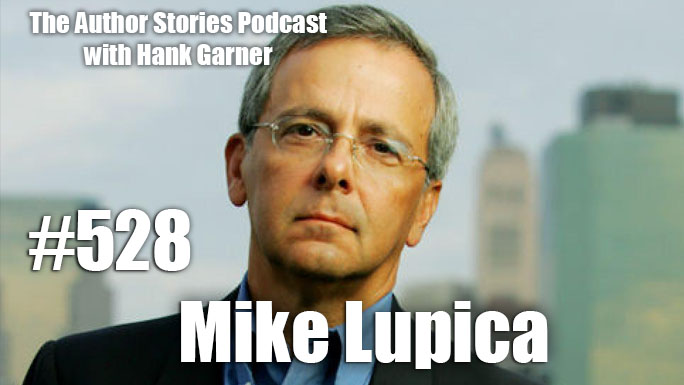 Today’s author interview guest is Mike Lupica, author of the new novel ROBERT B. PARKER’S BLOOD FEUD. Mike and I talked about his amazing story of becoming a sports journalist, his dual loves of journalism and mystery writing, his relationship with Robert B. Parker, being tapped to continue the Sunny Randall series, and much more.

Robert B. Parker’s iconic and irresistible PI Sunny Randall is back, and the stakes are higher than ever as she races to protect her ex-husband–and his Mafia family–from the vengeful plan of a mysterious rival.

Sunny Randall is “on” again with Richie, the ex-husband she never stopped loving and never seemed to be able to let go, despite her discomfort with his Mafia connections. When Richie is shot and nearly killed, Sunny is dragged into the thick of his family’s business as she searches for answers and tries to stave off a mob war. But as the bullets start flying in Boston’s mean streets, Sunny finds herself targeted by the deranged mastermind of the plot against the Burke family, whose motive may be far more personal than she could have anticipated…

Mike Lupica is one of the most prominent sports writers in America. His longevity at the top of his field is based on his experience and insider’s knowledge, coupled with a provocative presentation that takes an uncompromising look at the tumultuous world of professional sports. Today he is a syndicated columnist for the New York Daily News, which includes his popular “Shooting from the Lip” column, which appears every Sunday. He began his newspaper career covering the New York Knicks for the New York Post at age 23. He became the youngest columnist ever at a New York paper with the New York Daily News, which he joined in 1977. For more than 30 years, Lupica has added magazines, novels, sports biographies, other non-fiction books on sports, as well as television to his professional resume. For the past fifteen years, he has been a TV anchor for ESPN’s The Sports Reporters. He also hosted his own program, The Mike Lupica Show on ESPN2. In 1987, Lupica launched “The Sporting Life” column in Esquire magazine. He has published articles in other magazines, including Sport, World Tennis, Tennis, Golf Digest, Playboy, Sports Illustrated, ESPN: The Magazine, Men’s Journal Parade. He has received numerous honors, including the 2003 Jim Murray Award from the National Football Foundation. Mike Lupica co-wrote autobiographies with Reggie Jackson and Bill Parcells, collaborated with noted author and screenwriter, William Goldman on Wait Till Next Year, and wrote The Summer of ’98, Mad as Hell: How Sports Got Away from the Fans and How We Get It Back and Shooting From the Lip, a collection of columns. In addition, he has written a number of novels, including Dead Air, Extra Credits, Limited Partner, Jump, Full Court Press, Red Zone, Too Far and national bestsellers Wild Pitch and Bump and Run. Dead Air was nominated for the Edgar Allen Poe Award for Best First Mystery and became a CBS television move, “Money, Power, Murder” to which Lupica contributed the teleplay. Over the years he has been a regular on the CBS Morning News, Good Morning America The MacNeil-Lehrer Newshour. On the radio, he has made frequent appearances on Imus in the Morning since the early 1980s. His previous young adult novels, Travel Team, Heat, Miracle on 49th Street, and the summer hit for 2007, Summer Ball, have shot up the New York Times bestseller list. Lupica is also what he describes as a “serial Little League coach,” a youth basketball coach, and a soccer coach for his four children, three sons a daughter. He and his family live in Connecticut.