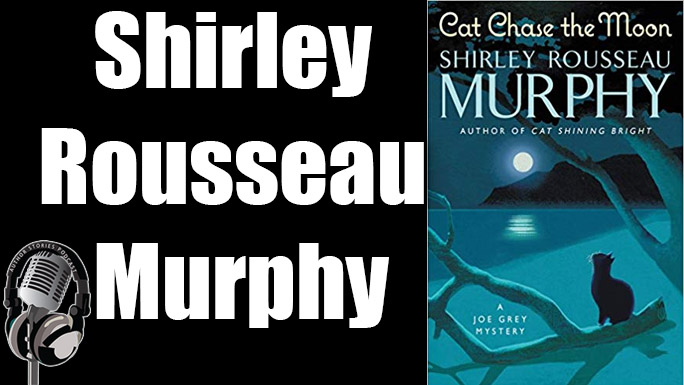 Hank: What is your first memory of wanting to be a writer or storyteller?

Shirley: I don’t recall wanting to be a writer but I was a voracious reader, I loved fantasy, I read Alice in Wonderland over and over, read anything I could reach down from my grandparents’ bookshelves. I might not understand the adult classics but I loved the sounds of the words. I wrote stories but the idea of being a writer, or being a painter, both of which I became later, didn’t occur to me. I simply needed to write and I very much needed to paint, the two passions springing from the same spiritual hunger, the same inner yearning or questions.

Hank: Did animals play a large part in your childhood?

Shirley: There were always animals: Of course we had cats, both at home and at the stables. My fourth birthday present was my very own dog. I got my first pony, on loan, when I was five. As I grew older there were plenty of horses to ride, I spent much more time with the animals than with other children.

Hank: What is your favorite mystery story?

Shirley: My favorite mystery is the one that hasn’t yet been written, the story that speaks to something deep in us and goes on perhaps forever without end.

Hank: You have written animal mysteries, Young Adult fantasy, as well as books for children. Do you approach the writing for these different audiences differently?

Shirley: Each story takes its own shape, first from scenes in my mind. A picture book, of course, more quickly forms itself into a whole story. Longer books, because they are more involved, wander in their scenes and in the voices and conversations I hear so that in places I will pause, think about the direction the story is going, make notes, move the plot along until the scenes again come alive on their own.

Hank: How much planning goes into your mysteries before the actual writing begins?

Shirley: My mysteries begin with scenes that most often come out of nowhere, out of that mysterious place in my being that wants story. When the best scenes have pulled me in, the planning begins with a rough outline, and slowly the scenes and emotions connect into story. Of course Joe Grey leads and directs. These are his stories, it is his voice I hear loud and clear…though as each new cat joins the group, that cat, too, leads me. As do their family of humans. The body of the book, then, is a combination of deliberate planning and of scenes that spring alive on their own out of that subconscious imagination that we all have hidden somewhere in our spirit.

Hank: How does writing from the perspective of a cat change the way the story unfolds for you?

Shirley: Writing from the cat’s perspective, knowing how he or she thinks and feels, is very satisfying for me. I seldom need wonder what Joe or Dulcie will say, they just say it, I hear them say it. I hear Kit going on and on as if she’ll never stop. I have to pause sometimes and work out what they can do physically, like unlocking a lock, or Dulcie at the computer. But perhaps I enjoy most the interplay between cat and human—and the change of viewpoint from cat to human and back again. This shift in focus carries the story along nicely for me, in a swift and satisfying manner that I would miss very much when working only with humans.

Hank: Your 21st. Joe Grey mystery is now out. How have the characters grown as the stories unfold?

Shirley: The cats have learned to understand their humans more clearly, and the humans to see more deeply into the cats’ natures. Joe Grey has discovered the more sympathetic and tender side of himself, Dulcie handles her mate with more skill, and Kit…Kit has grown up a lot, she can be more sensible on occasion—though she’ll never lose that giddy nature.

Hank: When beginning a new book, what comes to you first? Is it a character, a premise, a setting, or a “what if” situation?

Shirley: The beginning of a new book might be any of the above, but usually a scene is foremost. And always Joe Grey is beside me, watching with a critical eye.

Hank: What is your favorite thing to hear from your readers?

Shirley: My readers tell me so many true, personal things, their deep feelings about their own cats…and, the most heart rending, they tell me how the Joe Grey books have helped them over hard times, helped to ease or cheer them through illness or loss. They tell me they love Joe Grey, and that makes both me and Joe purr.

Feline P. I. Joe Grey and his friends pounce on three investigations that may connect to one larger mystery—including one case that is very personal—in this hair-raising installment in Shirley Rousseau Murphy’s beloved, award-winning series.

Joe Grey and his partner, Dulcie, are frantic when Courtney, their pretty teen-kitten goes missing. Aided by their two- and four-legged friends, they hit the streets of Molina Point in search of their calico girl. Has Joe Grey and Dulcie’s only daughter been lured away by someone and stolen? Is she lying somewhere hurt, or worse?

Courtney has no idea that everyone is desperately looking for her. Locked in an upstairs apartment above the local antiques shop, she’s enjoying her first solo adventure. When she first met Ulrich Seaver, the shop’s owner, Courtney was frightened. But the human has coddled and pampered her, winning her trust. Sheltered by her parents, her brothers, and her kind human companions, the innocent Courtney is unaware of how deceptive strangers can be. She doesn’t know that Ulrich is hiding a dangerous secret that could threaten her and everyone in this charming California coastal village.

With his focus on finding Courtney, Joe Grey has neglected his detective work with the Molina Point Police Department. Before his daughter disappeared, Joe found a viciously beaten woman lying near the beach. Now the police investigation has stalled, and the clever feline worries his human colleagues may have missed a vital clue. Joe is also concerned about a family of newcomers whose domestic battles are disturbing the town’s tranquility. Loud and abrasive, the Luthers’ angry arguing, shouting, and swearing in the early hours of the night have neighbors on edge and the cops on alert. One of the couple’s late-night shouting matches masked the sounds of a burglary, and now a criminal is on the loose.

Though the crimes are as crisscrossed as the strands of a ball of yarn, Joe Grey’s cat senses tell him they may somehow be linked. It’s up to the fleet-footed feline and his crime-solving coterie to untangle the mysteries before it’s too late.

Shirley Rousseau Murphy is the author of over 40 books, including the award-winning Joe Grey cat mystery series and three other novels for adults, the Dragonbards Trilogy and more for young adults, and many books for children. She grew up in southern California, riding and showing the horses her father trained. After attending the San Francisco Art institute she worked as an interior designer, and later exhibited paintings and welded metal sculpture in the West Coast juried shows. Her work could also be seen in many traveling shows in the western States and Mexico.

“When my husband Pat and I moved to Panama for a four-year tour in his position with the U. S . Courts, I put away the paints and welding torches, and began to write,” she says. After leaving Panama, they lived in Oregon, Atlanta, and northern Georgia. During that time she wrote her children’s and YA books, winning five Dixie Council of Authors and Journalists awards.

Murphy now lives in Carmel, California, to which she and her husband moved when he retired as Chief U.S. Probation Officer for the Northern District of Georgia. She has so far published 21 books in the Joe Grey serie. She welcomes email from her readers, which can be sent to srm@srmurphy.com or through the contact form at her website www.srmurphy.com.